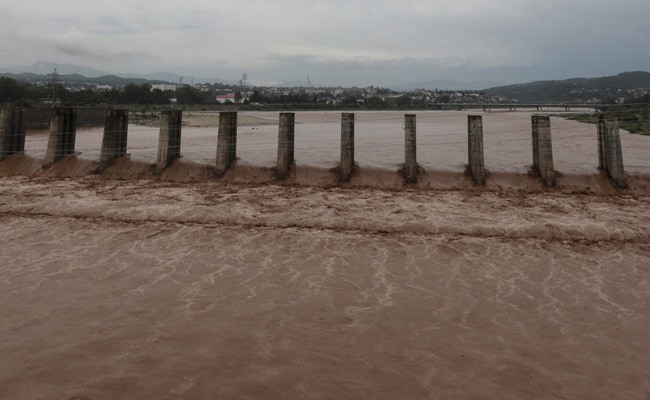 Jammu and Kashmir flash floods: Rainfall led to rise in water levels in rivers in Jammu, including Tawi.

Eleven people belonging to a nomadic community were stuck in flash floods in Ujh river in the Rajbagh area and were rescued by police and State Disaster Response Force (SDRF) personnel, they said.

Several farm animals were, however, washed away, the officials said.

The district administration in Kathua and Samba sounded a flood alert.

Traffic movement was disrupted on the Pathankot-Jammu highway due to heavy flooding, they said, adding that a truck overturned on the carriageway near Kathua.

The Ujh, Basantar and the Eik nallahs were in spate in Kathua and Samba, triggering fear in the population living near these water bodies, the officials said.

Areas around the check dam Dhalote in Samba are inundated, they said, adding that locals have appealed to the authorities to open the flood gates of the dam.

The heavy downpour led to a rise in water levels in major rivers in Jammu, including the Tawi, while a small bridge collapsed in Gadigarh.

The Jammu-Srinagar national highway was closed due to several landslides triggered by heavy rains in Ramban district, and men and machines were deployed to clear the highway, the officials said, adding that one-way traffic was briefly restored.

The mercury in most parts of Jammu and Kashmir nose-dived during the day due to the torrential rains, with Jammu recording a high of 24.8 degrees Celsius, 3.3 notches below normal, a weather official said, adding that rainfall was recorded at 150 mm.