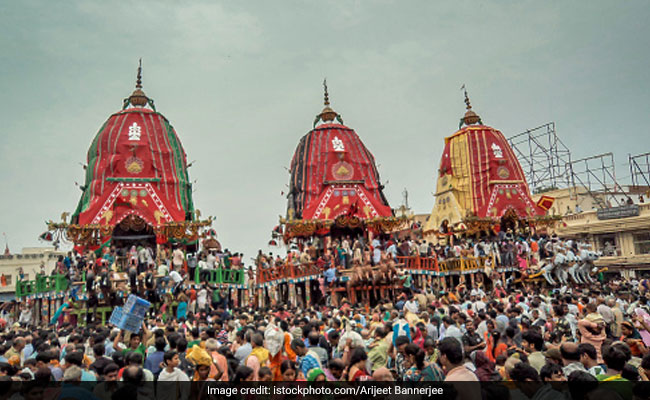 Last year, authorities had performed all rituals on the temple premises at Albert Road. (File)

In a departure from tradition, Lord Jagannath and his divine siblings, amid the COVID-19 restrictions, will give the hand-pulled chariot a miss this time and instead travel in a cavalcade of 15 cars, covering a distance of three kilometres, as part of the ISKCON Kolkata’s 50th year Rath Yatra celebrations.

At the organisation’s global headquarters in Mayapur, too, the annual festival will be a low-key affair, as just one tableau will be taken out on the premises with around 50 people pulling it in turns.

The city chapter of International Society for Krishna Consciousness (ISKCON), which was supposed to mark its golden jubilee this year with gala celebrations on the occasion of Rath Yatra, had to scrap its plans due to COVID-related curbs, its spokesperson Radharaman Das said on Saturday.

The organisation, nevertheless, has made arrangements to ensure that the festival is observed with great fervour, he maintained.

“On the day of Rath Yatra (July 12), around 12 noon, deities Sri Jagannath, Baladev and Subhadra Devi will be travelling from our Albert Road office to another centre on Gurusaday Road, where they will be putting up till July 20 evening,” Mr Das explained.

He, however, rued the fact preparations to mark the golden jubilee had been underway for the past seven years, and the centre had plans to deck up chariots and take out a huge procession on the occasion, but all that had to be cancelled in the wake of the pandemic.

“We wanted to invite devotees from more than 150 different countries and 1200 ISKCON centres. But all plans stand cancelled. Also, with the threat of the pandemic’s third wave looming, we appeal to people to stay at home and watch the live telecast of Rath Yatra rituals on our YouTube channel or Facebook page,” Mr Das stated.

Last year, authorities had performed all rituals on the temple premises at Albert Road.

“Three small chariots, similar to the ones pulled by children, were taken out briefly in the temple compound by the monks, as a symbolic gesture,” Mr Das added.

In Mayapur, a makeshift Gundicha temple will be set up on the premises, which the three deities will be visiting for nine days, in accordance with the rituals, Subroto Das, the spokesperson of the organisation”s headquarters, said.Carcade To Replace Chariots On Rath Yatra In Kolkata

“A team of 50 persons, comprising devotees, will render direct ”sewa” to the deities — pull the rath, prepare Chappan Bhoga (56 dishes), make garlands, deck up the tableau. Just one rath instead of three will be taken out on the temple premises this time,” he noted.

Rath Yatra commemorates the annual visit of the three deities to Gundicha Temple.

Three People Drown In A Pond In Uttar Pradesh: Police