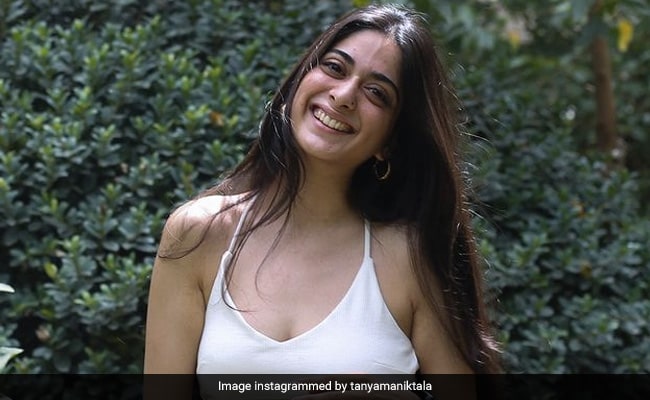 Actress Tanya Maniktala, who is known for her work in the Netflix series A Suitable Boy, opened up about her “idea of love” in her piece for Humans Of Bombay. In the piece, Tanya Maniktala gave us all the details about her love life starting right from her first crush. Tanya shared that she had her first crush on a “stereotypical bad boy” when she was in 5th grade. “I live in the same neighborhood as I’ve always lived in; we’d go out to play and this group of boys would play football in our park. I was in the 5th grade when I saw this boy there-he was good looking and a stereotypical bad boy. I really liked him,” Tanya wrote. “My best friend realised I was going to the park very often and figured out that I liked him. I was shy-so she’d take me to his house, ring the bell and make up some excuse to see him,” she added.

The actress then recalled how her best friend helped her in approaching her first crush by sending him a friend request on Facebook. “He had FB, so she sent him a friend request from my ID. She’d send messages on my behalf; he once replied, ‘You never come up and talk to me.’ I freaked out-I was too young! But yeah, he was my first and only crush for a while,” she wrote.

Tanya Maniktala also shared that “boys would avoid” her back in her teenage days as she had an elder brother. She shared how “this one guy” approached her through her best friend. “I have an older brother, so boys would avoid me because of that. But this one guy saw me at a friend’s birthday party and asked my best friend if she could get me to talk to him. So the next day, when she told me, I was like, okay; I didn’t think much of it,” Tanya wrote.

She went on to share how she got scolded by her mother for speaking to the guy on the phone in her bathroom. “He asked me, ‘Can we be friends?’ He took my number; we had a landline back then. But I couldn’t have a guy calling me up; if my parents found out, I’d be gone! So when he called, I took the phone to my bathroom and called him back,” Tanya Maniktala wrote. “My mom knew something fishy was happening; she knocked on the door and said, ‘Who are you talking to?’ I replied, ‘Nobody!’ When I came out and told her about the guy, she said, ‘Papa ko batau kya?’ (should I tell your father),” she added.

Tanya recalled how her “love story” ended even before it began because her elder brother asked the guy to stay away from her. “The next day, my older brother tells this guy, ‘Tanya se door rehna! (stay away from Tanya)’ And that was the end of my love story! After that, I stayed away from boys-I didn’t want to get into any more trouble,” she wrote.

She ended the note by sharing her “idea of love” with us. Tanya shared that the love that she seeks is the “one where you never give up.” Tanya wrote: “The kind of love I seek is one where you never give up. And even though your partner might be having the worst day, they find a smile to give you or a small secret to share with you.” She added: “Someone who feels like I’m going home; I want to have that- & I never give up on the idea of love because there’s too much love I have in here. And someday I want to be able to say, ‘Oh my god, wow.'”

As mentioned above Tanya Maniktala is known for her work in the show A Suitable Boy. She garnered a lot of appreciation for her role of Lata Mehra. She will next be seen in Netflix’s romantic-drama Feels Like Ishq.

Vaccine Hesitancy In Some Communities A Cause Of Concern: Amit Shah

254 Rich Indians Used (*12*)sp-cn ins_storybody” id=”ins_storybody”>Golden visas allow rich individuals to to live in the UK if they invest in UK firms. (Representational)London: A total of 254 millionaires from India have used the so-called “golden visa” to settle down in the UK through a large investment into the country since the route opened in 2008, according to a new report released by a UK-based anti-corruption charity on Monday.Spotlight on Corruption said that Indians ranked as the seventh nationality of super-rich to have availed of the Tier 1 (Investor) Visa, adding up to 254 between 2008 and 2020. China topped the list at 4,106, followed by Russia (2,526), Hong Kong (692), the United States (685), Pakistan (283) and Kazakhstan (278) ahead of India.Saudi Arabia at 223, Turkey at 221 and Egypt at 206 complete the list of top 10 countries to have been issued the visa allowing applicants residency rights in the UK, with around half the total now under review.”Golden visas permit rich people to purchase the appropriate to live within the UK in the event that they put money into UK-registered corporations. Individuals that make investments 2 million kilos get a right away proper to live within the UK for 3 years, adopted by a two-year extension,” notes the report entitled ‘Red Carpet for Dirty Money”.”Those that make investments 10 million kilos might be fast-tracked to get indefinite go away to stay inside two years, or inside three years in the event that they make investments 5 million kilos. From indefinite go away to stay visa holders are on a gradual path, after one 12 months, to a lot prized UK citizenship,” it adds.Diamond merchant Nirav Modi, wanted in India on charges of fraud and money laundering in relation to the Punjab National Bank (PNB) scam and now fighting against being extradited to India in the High Court in London, is believed to have been living in the UK on an Investor Visa applied for in 2015.At the time, the route was relatively easier for super-rich individuals to acquire residency rights in the UK, based on a minimum of 2-million-pound investment.It is dubbed the “blind religion” period but since then the UK Home Office tightened the norms for the category and announced a review around three years ago of these visas issued between 2015 and 2018.Spotlight on Corruption claims that all 6,312 golden visas issued during the “blind religion” period are under review by the Home Office for “potential nationwide safety dangers”, which amounts to half of all such visas issued overall.”The UK’s golden visa regime continues to pose a major corruption, cash laundering and nationwide safety danger to the UK,” said Susan Hawley, Executive Director of Spotlight on Corruption.”It is alarming and deeply unfair that the federal government is changing into draconian in different components of its immigration coverage however has but to shut main loopholes that permit soiled cash to return to the UK. The authorities should fee an unbiased assessment of whether or not the regime offers any actual profit to the UK,” she said.The new report by the charity, which has a remit to fight corruption within the UK and wherever the UK has influence, has called on the government to urgently publish the findings of its review of the visas issued under the category in the 2008-2015 period.It includes detailed statistics on what action has been taken on specific cases, including referrals to law enforcement, revocation of visas, and denials of citizenship applications.Its report warns that the golden visa regime continues to pose a significant “nationwide safety, corruption, and cash laundering danger” to the UK despite recent reforms.”Glaring loopholes stay, together with that candidates utilizing ”gifted” funds to use for a golden visa nonetheless face no due diligence, and that the Home Office stays over-reliant on monetary establishments for due diligence on wealth invested,” it warns.The UK Home Office said the route has been reformed in the last few years to crackdown on black money and that it will report on its pre-reform findings in due course.”We reformed the Tier 1 visa route in 2015 and in 2019 to crack down on soiled cash and we now have not dominated out making additional modifications, if obligatory,” the Home Office said in a statement.”These modifications embody requiring banks to do further due diligence checks previous to opening accounts and requiring candidates to supply proof of the supply of their funds. As a part of our work to stop this route from corruption we’re reviewing all Tier 1 investor visas granted earlier than these reforms have been made, and can report on our findings in the end,” the assertion mentioned.(Except for the headline, this story has not been edited by NDTV employees and is revealed from a syndicated feed.)