Caught On Camera: Man Forced To Take Off Clothes During Robbery In Delhi 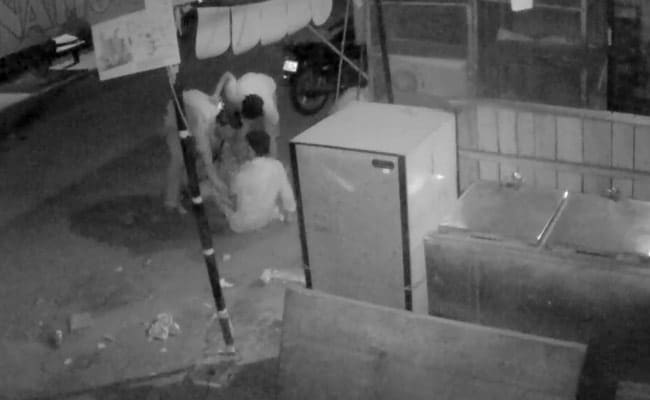 A new video has emerged online that showed three men robbing a man in Delhi’s Raghubir Nagar area. The robbers first beat up the man with a belt, then rob his belongings and even force him to take off his clothes in the middle of a deserted street during the incident that was captured in a CCTV camera installed in the area.

Three people have been arrested in connection with the incident, police officials said.

The video showed the two robbers waylaying the man at the deserted street, while a third is seen waiting for them on a two-wheeler. Nobody else — other than the robbers and the victim — was present on the street when the incident occurred.

The video, however, showed vehicles moving at high speed just metres away from them, possibly on the main road linking the street. One motorcyclist even entered the street as the robbery was underway, but immediately made a u-turn, without raising any alarm.

Police said the man robbed was a driver by profession and he filed a case against three people at Raghubir Nagar police station. After an investigation, three suspects, identified by their first names only — Lakhwinder, Deepak, and Aakash — were arrested. The items robbed from the driver have also been recovered from the three suspects.

As the coronavirus restrictions are being gradually relaxed in a phased manner, incidents of crime have been reported across the national capital.

On the night of July 3, a man snatched a 67-year-old woman’s bag as she walked through a dark, deserted street in South Delhi’s CR Park area. That incident was also captured on a CCTV camera. Three men were arrested in connection with the incident. Two of them were 19-year-olds and the third was 18. A bag, some cash, a mobile phone, the woman’s ID card, and a vehicle used in the robbery were recovered. The incident was caught on CCTV camera.

After enforcing strict restrictions while the second wave was at its peak, authorities have gradually begun to allow people and businesses to return to normalcy. But this has also resulted in some people dropping their guard against the deadly virus.

“No Shortcuts, No Magic Pills”: Actor Rohit Roy Sums Up His Physical Transformation With This Post