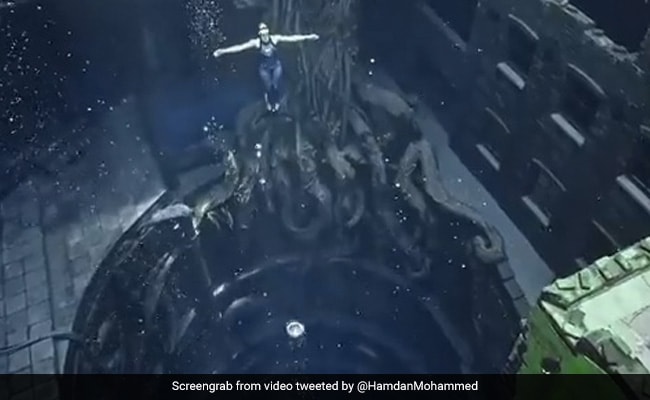 Deep Dive Dubai: The extraordinary indoor pool has a depth of 196 feet.

The deepest swimming pool in the world for diving has opened in Dubai. With a staggering depth of 196 feet (60 metres), the pool is part of the new Deep Dive Dubai tourist attraction in a city that already houses the world’s tallest building and the world’s largest mall. On its website, Deep Dive Dubai describes the pool as a “world-record breaking facility” – one which is 15 meters deeper and four times bigger than any other diving pool in the world.

On June 27, Guinness World Records certified the pool as “the deepest swimming pool for diving”.

“The Pearl Diving Pool is a facility of approximately 5,000m2 gross floor area constructed for His Highness Sheikh Hamdan bin Mohammed bin Rashid al Maktoum. It will primarily be an indoor scuba diving facility for training and recreational purposes, with facilities for education, training and recreation,” Guinness said in its statement.

The buzz around the swimming pool – which also features an astonishing ‘sunken city’ – only grew when the crown prince of Dubai, Sheikh Hamdan bin Mohammed bin Rashid Al Maktoum, shared a video of the pool on Twitter. “An entire world awaits you at Deep Dive Dubai the world’s deepest pool, with a depth of 60 meters (196 feet),” he wrote, sharing the clip which shows divers exploring an incredible underwater city complete with sunken trees, bathrooms, libraries and several arcade games.

An entire world awaits you at Deep Dive Dubai the world’s deepest pool, with a depth of 60 meters (196 feet) #Dubaipic.twitter.com/GCQwxlW18N

According to Deep Dive Dubai, the indoor pool is filled with 14 million liters of freshwater, the equivalent of six Olympic-sized swimming pools. Water temperature is maintained at 30 degrees Celsius.

Divers – both beginners and professionals – will be able to explore “a stunning underwater attraction that is themed to resemble an abandoned sunken city.”

“There are quite a few dive pools in the world that are deep, but this one is so much more interesting,” Deep Dive Dubai director Jarrod Jablonski told CNN. “It’s not only deepest and largest, but the sunken city effect makes it next world order.

The pool is currently open by invite only. It will open to the public later this year.

Megan Fox Says Her Son, 8, Has Been Bullied Online For Wearing Dresses