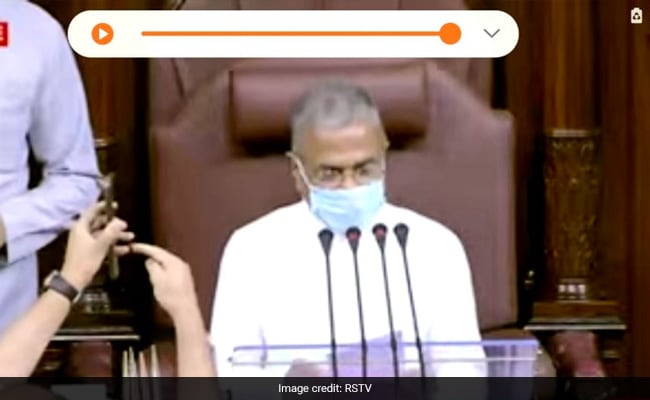 High drama continued in both the Lok Sabha and Rajya Sabha for the third straight day of the monsoon session of parliament as opposition MPs staged protests over a range of issues, including including the Pegasus snooping controversy.

Both the Houses were adjourned twice – first till 12 noon and then till 2 PM – as MPs trooped into the Well of the House shouting slogans and holding placards. “Members seem to be not interested in discussing people’s issues,” Rajya Sabha Chairman M Venkaiah Naidu said as he adjourned the proceedings in the upper house amid protests from opposition members.

In the Lok Sabha, Bhartruhari Mahtab, who was in the Chair, was forced to adjourn the proceedings for the second time – the Question Hour barely continued for 12 minutes before Speaker Om Birla adjourned the House till 12 noon – after protesting members ignored his plea to go back to their respective seats and engage in discussion.

While leaders from Congress and Shiromani Akali Dal targeted the government on the contentious farm laws, Trinamool Congress members gathered near the Speaker’s podium raising the Pegasus snooping issue. They shouted slogans seeking answers from the prime minister.

The protests continued despite Parliamentary Affairs Minister Pralhad Joshi saying that the government was ready to discuss any topic the opposition wanted. “Rajya Sabha had a discussion on Covid…. We are ready for discussion on whatever topic you want…. Question Hour is a right of every member,” Mr Joshi said according to news agency PTI.

Rajya Sabha also failed to have an uninterrupted day of functioning today as opposition members tried to raise the issues of income tax raids on the Dainik Bhaskar along with the alleged snooping using Pegasus spyware.

As soon as the House assembled for the day, Congress leader Digvijaya Singh tried to raise the issue of raids against the media group in multiple cities. Other opposition members, including those from the Trinamool, rushed into the well over alleged targeting of political rivals, journalists, and critics for surveillance using Israeli company NSO Group’s Pegasus spyware.

“I have not permitted you. You have to seek permission from me. Nothing shall go on record,”
Rajya Sabha Chairman M Venkaiah Naidu told Digvijaya Singh as he began speaking.

“This is not the way,” Mr Naidu said and called for listed official papers to be laid on the table.

But the members continued to protest, forcing Mr Naidu to adjourn the proceedings. Just one listed paper could barely be laid before the proceedings were adjourned.