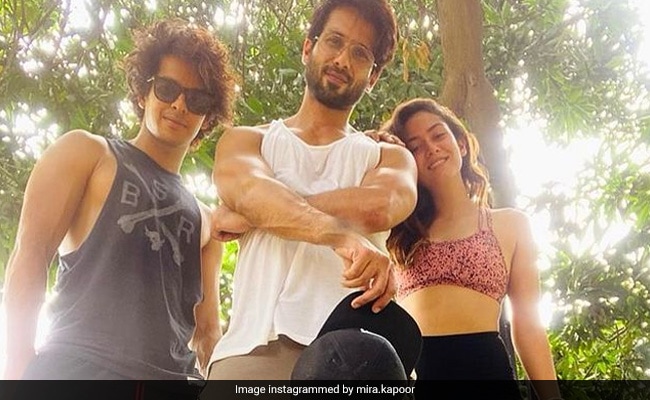 Mira Rajput and brother-in-law Ishaan Khatter often tease each other on Instagram. On Wednesday, Mira posted a picture of herself with husband Shahid Kapoor and brother-in-law Ishaan Khatter on her Instagram stories. She referred to Ishaan as “forever third wheel” and she jokingly captioned the picture: “Forever third wheel. Get out of my bed.” Shahid Kapoor, son of actors Pankaj Kapur and Neelima Azeem, married Mira Rajput in July in 2015. Their daughter Misha was born a year later in August. Shahid and Mira are also parents to a son named Zain, who they welcomed in the year 2018. 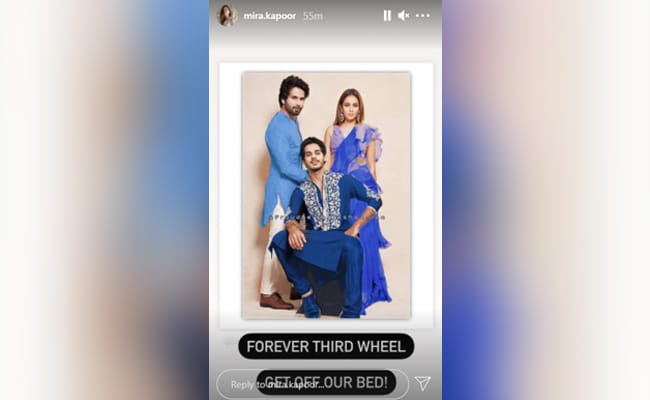 Shahid Kapoor  is a star of critically acclaimed as well as hit films like Udta Punjab, Haider, Jab We Met, “Padmaavat” and Ishq Vishk. His last film was the 2019 hit Kabir Singh, co-starring Kiara Advani. The actor will next be seen in Jersey, in which he plays the role of a cricketer.

Ishaan Khatter, son of Rajesh Khattar and Neelima Azeem, made his acting debut with Beyond The Clouds, which was directed by Majid Majidi. He then starred in Dharma Productions’ Dhadak in 2018, which marked the debut of late actor Sridevi’s daughter Janhvi Kapoor. Last year, Ishaan starred in Khaali Peeli with rumoured girlfriend Ananya Panday, which released on the streaming platform ZeePlex. He also featured in Mira Nair’s web-series A Suitable Boy, co-starring Tabu.

Ishaan Khatter’s upcoming project is Phone Bhoot, a horror comedy, in which he will co-star with Katrina Kaif and Siddhant Chaturvedi. This will be his first collaborative project with these actors.