Guru Purnima 2021: Know Date, Time And Significance Of The Day 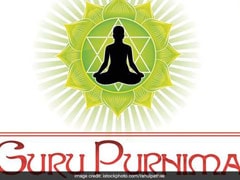 Guru Purnima, a day for the worship of teachers and mentors, will be observed on Saturday, July 24, the full moon day of the Ashadha month. On this day, people pay respect to their gurus, who can be a spiritual guide or anyone else who has enlightened others with their knowledge and teachings. Guru Purnima is also known as Vyasa Purnima, after the author and legendary sage who featured in the epic Mahabharata. On this day, people celebrate the birth anniversary of Veda Vyasa.

Guru Purnima is also celebrated by Buddhists to commemorate the day when Gautama Buddha gave his first sermon at Sarnath, Uttar Pradesh, India. The word ‘guru’ is derived from Sanskrit and it means the one who dispels darkness and engenders light.

People across India observe Guru Purnima on Ashadha Purnima (a full moon day in the month of Ashadha). Based on the Georgian calendar, it falls in the months of June and July. This year, it will be observed on July 24.

Hindu festivals and ceremonies are based on the Tithi Calendar (for auspicious timings). The Guru Purnima Tithi this year begins at 10:43 AM on July 23 and ends at 08:06 AM on July 24.

In Hinduism, the role of a teacher in shaping a person’s life and philosophies has always been placed at the top since ancient times. On this day, Hindu scriptures say, Lord Shiva, the first or Adi Guru of the world, gave the knowledge of Yoga to Saptarishis (the Seven Sages) for the benefit of humanity. Hence, many people observe a fast in honour of their guru and also visit a temple or their teacher to seek their blessings.

Meaning: I pay my respects to the guru, who is the creator, the preservor, and the destroyer for me. I bow before him, who is the personification of the trinity to me.

Sawan Somvar 2021: Date, Significance And All You Need To Know

Delhi riots: Provisions Of Law Not To Be Debated In Bail Matters, Says Supreme Court