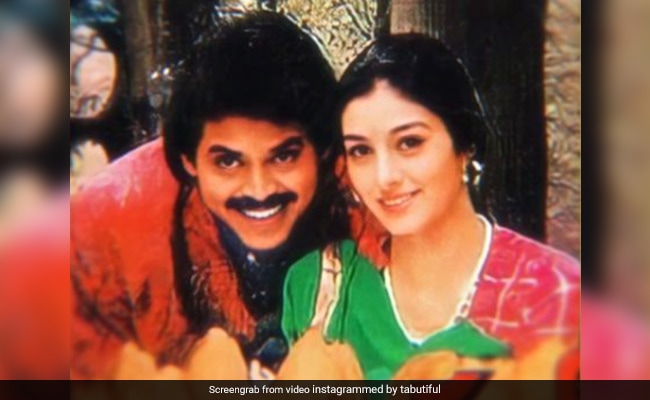 Actress Tabu, who is one of the most prolific performers in the country today, needs no introduction. With each role that she takes on, the 49-year-old manages to leave the audience impressed with her sheer talent and the novelty she brings to each character. And given how stunning the actress looks while pulling off the most complex of roles, it could come as a surprise to many that Tabu has been entertaining cinema lovers across the world for three decades now. On Monday, the actress completed 30 years in the industry and shared a post on Instagram to mark the occasion. She did so by posting a clip from the 1991 Telugu film Coolie No.1. The video is from the film’s popular song Kotha Kothaga in which she is seen alongside actor Daggubati Venkatesh.

While the video of the two iconic actors dancing in a garden of tulips was nostalgic in all the right ways, it was the note that Tabu penned with the video that won us over. Serving as a lesson in humility, the caption gave us a peek into why the actress is one of the most successful artists of her generation.  In it, she wrote, “Slightly unbelievable and thoroughly overwhelming to know that it’s 30 years since my first film Coolie No.1 released. It’s a moment of much pride, along with many other emotions..most importantly of gratitude. To thank Rama Naidu sir, Suresh Naidu, Venkatesh Naidu for giving me my first release, for laying a solid foundation for the years to come…And for whom I will always be Paapa (baby in Telugu),” referring to the producers of the film as well as her co-star. Daggubati Ramanaidu is one of the most successful producers in south Indian films. Suresh Naidu and Venkatesh Naidu are his sons.

In addition to this, Tabu also thanked the director of the film, K Raghavendra Rao. She said in the note, “My guru K.Raghavendra Rao for presenting me like a dream on screen, who taught me all that I needed to learn about humility, beauty, the value of being on time and of never forgetting to enjoy life. Thank you, Gurugaru. I owe you much. Thank you to everyone who walked with me during this journey.”

She also thanked Baahubali actor Rana Daggubati for sharing the video with her. Rana is the son of producer Suresh Babu. In her hashtags, she also mentioned music director Ilaiyaraaja who composed Kotha Kothaga and singers SP Balasubramaniam and KS Chitra who rendered it for the film.

Several fans and colleagues of the actress showered love in the comments section of the video. Actor Ayushmann Khurrana, who worked with Tabu in Andhadhun, wrote, “Wow,” followed by a heart emoji. Designer Sandeep Khosla and actress Rasika Dugal left a bunch of hearts in the comment section.

Summing up the common emotion of most fans of the actress, one follower wrote, “Congrats on 30 years, Tabu ji. We’re blessed to have been able to witness you create magic on screen…Looking forward to your work for many many more years to come.”

Tabu was last seen in the film Jawaani Jaaneman, alongside Saif Ali Khan. She will appear next in Bhool Bhulaiyaa 2, a horror-comedy directed by Anees Bazmee.