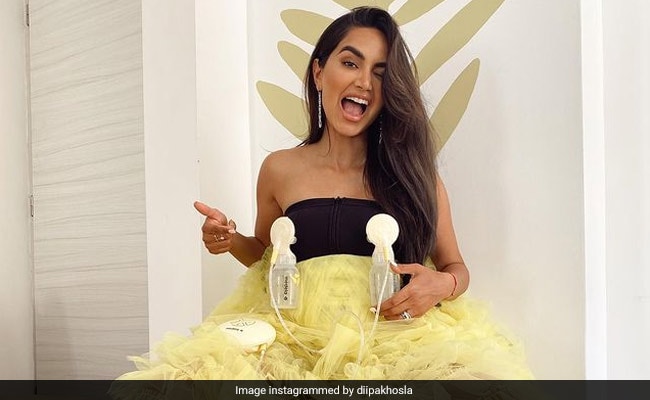 For desi influencer Diipa Buller-Khosla, it was the third time walking the red carpet at Cannes. This time, however, was special for Diipa – it was the first time she attended the film festival as a mother. The new mom (Diipa delivered a baby girl just two and a half months ago) chose to make a statement on motherhood with one of her Cannes outfit this year. She added breast pumps to her gown in an attempt to address the judgment and scrutiny that mothers – both new and experienced – face constantly. “Being a mother does NOT mean that you are now the target to everybody and anybody’s scrutiny,” Diipa wrote in an Instagram post shared Friday. “Whether it be opinions shared from family, friends, or strangers; the judgement is still unapologetic and burdensome on new or experienced mothers,” she said.

Alongside her post, she shared a picture which shows her sporting breast pumps over a black and yellow gown.

“I chose to shed light on this topic due to the countless messages or comments from people who’ve questioned and judged my decisions as a mother – An issue I’m certain that most women endure on social media,” wrote Diipa Buller-Khosla, who is based in the Netherlands with husband Oleg.

She added that whether she chose to breastfeed her daughter or not should not be anyone else’s concern. Breastfeeding, she noted, does not work for all mothers – and it’s not something they should be judged for. “There are countless concerns that go into breastfeeding, it simply doesn’t work for all mothers, something that no mother should be judged for online or off,” she said.

“This is just a reminder that online personalities are human as well, where life and feelings lay behind a screen. I kindly ask that you withhold judgmental remarks regarding any mother who is on this beautiful journey of motherhood,” wrote Diipa in her Instagram post. She also revealed that before leaving for her two-day business trip, she prepared for her absence by breast-pumping multiple times prior to her departure.

The post has clocked in over 97,000 ‘likes’ and hundreds of comments on the photo and video sharing platform.

“Such a powerful post, I couldn’t agree more,” wrote one person in the comments section.

“This is amazing. As a breastfeeding working mama in tech, I so appreciate this picture,” said another.

Last year, she had also spoken to Humans of Bombay about her meet cute and subsequent marriage to Oleg Buller – a love story that won hearts on social media.

Woman Infected With 2 Variants Highlights Next Challenge In Covid Fight