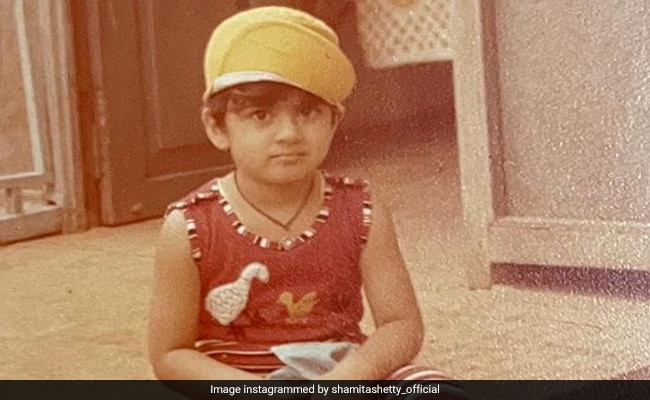 Actress Shamita Shetty has always impressed fans with her stunning looks and impeccable fashion choices. What if we told you that her sharp sartorial sense is something she possessed from a young age? And we have proof. Shamita Shetty’s latest throwback photo of herself as a child shows that the actress has always been a fashionista. Dressed in a sleeveless T-shirt, matching pyjama pants, white shoes and a cap, “mini” Shamita is cuteness personified. We also absolutely love the hint of a smile creeping on young Shamita’s face as she looks into the camera.

Sharing the image, Shamita acknowledged the stylish vibes that her younger version was giving out. In the caption, she wrote, “Mini me… was just trying out a hip hop vibe I guess !” Well, it looks like Shamita’s “vibe” was a hit with her fans who were generous in their praise for the actress in the comment section. Actress Mouni Roy reacted to the image with the comment, “Too cute.”

Shamita has often shared images from her childhood on Instagram, much to the delight of her fans. In one such image, a baby Shamita can be seen dancing. Dressed in a white dress, Shamita seems to be unaware of the photo being taken. Along with the image, she wrote, “Throwback. Don’t let people discourage you .. just fluff out your confidence and dance anyway.” This image, too, saw a comment from Mouni Roy, who wrote, ” Oh my god!!! Too cute.”

Here’s the photo that had us smiling:

And it is not just her childhood photos that Shamita shares on her social media account. She also posts about important life and career milestones. For instance, Shamita had shared a video about the time she discovered her love for dancing. The clip was from the film Mohabbatein in which she was cast opposite Uday Chopra. She wrote in the caption, “Throwback when I discovered my love for dancing.” Shamita’s sister, actress Shilpa Shetty was among the first to express her love in the comments section. Praising her younger sister’s moves, she wrote, “Ufffff,” followed by heart and evil eye emojis.

Shamita Shetty, who made her debut in the film Mohabbatein, followed it up with roles in movies like Agnipankh, Wajahh: A Reason To Kill, Fareb, Zeher, and Cash. She has also appeared in reality shows such as Bigg Boss and Jhalak Dikhhla Jaa. She was last seen in the web series Black Widows.