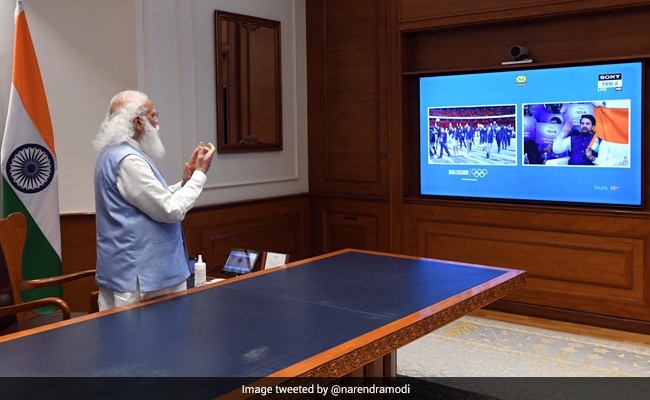 The sportspersons representing India at the Tokyo Olympics have overcome numerous challenges and thus need “your love and support”, Prime minister Narendra Modi said today as he urged the nation to come forward and support all the athletes who are participating in the global event to make the country proud.

Addressing the 79th episode of his monthly radio programme “Mann Ki Baat”, PM Modi also recalled the meeting with the sportspersons before they left India for the Olympic games.

“These sportspersons have reached where they are after overcoming numerous hurdles in life. Today, they possess the strength of your love and support – that’s why, come… let us together extend our good wishes to all of them; encourage them,” PM Modi said.

“At the Tokyo Olympics, watching Indian sportspersons march carrying the Tricolour exhilarated not just me but the entire country…. as if the whole country unitedly exhorted her warriors saying, “Vijayi Bhava – emerge victorious,” he said.

He also urged the listeners to join a campaign on social media to support the athletes. “On social  media, our Victory Punch Campaign for the support of Olympics sportspersons has begun. Do share your Victory Punch with your team…. Cheer for India,” he said.

During his previous ”Mann Ki Baat” address held in June, PM Modi had also urged the nation to come forward and support all the athletes.

“Every athlete who will be going to Tokyo Olympics has had to struggle, they have worked hard for a long time. They are just not going to the Games for themselves, but they are heading to Tokyo to make the country proud. They have to win over people”s hearts and they need to make everyone in the nation feel proud. I want to urge the citizens of our country to not increase pressure on our athletes, rather you need to motivate them,” the Prime Minister had said.

“Could not have asked for a happier start to @Tokyo2020! India is elated by @mirabai_chanu’s stupendous performance. Congratulations to her for winning the Silver medal in weightlifting. Her success motivates every Indian,” PM Modi tweeted with #Cheer4India #Tokyo2020.

Tokyo Olympics 2020 were slated to be held last year, but it was postponed due to the COVID-19 pandemic. The games started on July 23 and will continue till August 8 this year.

Watch: Man Slips Trying To Board Moving Train At Delhi Station, Cop To The Rescue

National Parents’ Day 2021: History And Significance Of The Day