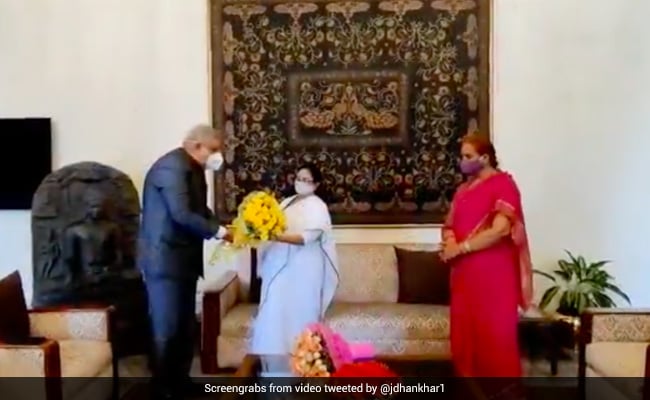 Bengal Chief Minister Mamata Banerjee today had an hour-long meeting with Governor Jagdeep Dhankhar, who tweeted later that the interaction was “without aides”. This was their first meeting after their latest clash, on the opening day of the state assembly session.

“The two had an hour long interaction without aides,” tweeted the Governor, sharing visuals of Mamata Banerjee being greeted and the two exchanging flowers.

The two had an hour long interaction without aides. pic.twitter.com/d1JdcbPZSw

The Chief Minister did not comment as she left the Raj Bhavan.

In the latest confrontation between Bengal’s top two, the Governor did not read his full address to the assembly on July 2.

He read only the first and last paras of the speech amid protests by BJP MLAs.

Ms Banerjee’s Trinamool Congress accused the Governor of using the protests to avoid reading the speech, which, by convention, is written by the state government and is meant to talk about the state’s policies.

The long-running feud between the two escalated dramatically last month when Ms Banerjee raised corruption charges against Mr Dhankhar for the first time.

Calling Mr Dhankhar a “corrupt man”, the Chief Minister alleged that he had been charged in the 1996 Jain hawala case involving a diary that named politicians who had received kickbacks.

“This Governor’s name was in the Jain Hawala case. But they have gone to court, cleared it from the court. There is a PIL. But the PIL is pending. What do you want to know? He is a corrupt man, I am sorry to say. All corruption-oriented man. Why does the Centre allow a Governor like this? Take out the charge-sheet and see if his name was there or not,” Ms Banerjee told reporters.

The Governor said he was “shocked” at the Chief Minister’s allegations.

“Your Governor has not been charge-sheeted. There is no such document. This is far from facts. This is plain and simple untruth. This is misinformation. I did not expect this from a seasoned politician,” Mr Dhankhar told reporters.