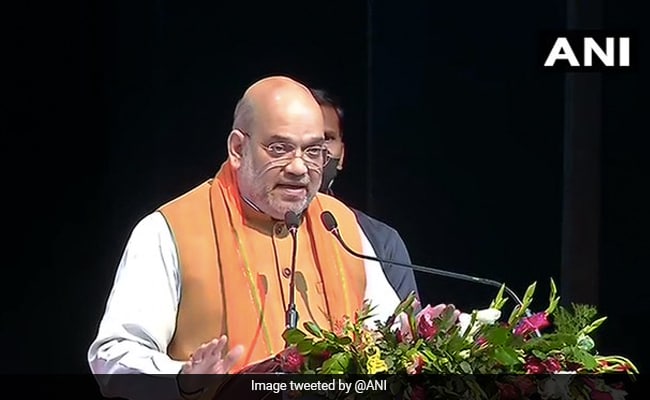 Union Home Minister Amit Shah on Sunday said Prime Minister Narendra Modi is probably the first leader to create systems ensuring the continuation of development work even after he left the post.

Mr Shah laid the foundation stone of projects worth Rs 244 crore in Ahmedabad and surrounding areas, which are part of his Gandhinagar Lok Sabha constituency, and hailed the development work started in Gujarat by PM Modi, who was then the chief minister of the state.

“After so much of experience in politics, I have seen many type of leaders. There are some who just allow things to happen at their pace and go to cut the ribbon. There are such leaders also who work hard to ensure best development takes place during their tenure,” Mr Shah said.

“But there are some others, probably Narendra bhai is the first such leader, who builds such mechanism that development continues even after they have left,” he said addressing a gathering in Bopal area of the city

He said Gujarat has benefitted a lot from the 14-year rule of Narendra Modi as the chief minister.

“Systems and arrangements were made in those 14 years which ensure development work takes place even after he has left Gujarat,” Mr Shah said.

The Union minister inaugurated a civic centre, a reading centre with a capacity of over 150 students in Bopal area, supply of drinking water to Ghuma, a community hall, party plot and various other projects.

He also inaugurated some projects of the Western Railway for redevelopment and increasing facilities at stations in the western part of Ahmedabad.

“It is my endeavour to ensure the development of the Gandhinagar Lok Sabha area and I thank all officials who have worked for the completion of these projects,” Mr Shah said.

He said the government has started a massive work of providing a ”suraksha kavach” (protective shield) against the coronavirus by taking up the vaccination drive.

“I am pleased to inform you that around 86 per cent of those aged above 45 and 32 per cent of people in the age group of 18 to 45 have been vaccinated in Ahmedabad. But, this is not enough,” he said.

The remaining 14 per cent in the 45 plus age group and 70 per cent youths (in the 18-44 age group) should get vaccinated and all should take their second doses also. “This will provide protection to all,” he said.

Mr Shah said though there was a shortage of oxygen in the second wave of the COVID-19 pandemic, Prime Minister Modi has taken up the task of setting up oxygen plants in hospitals and substantially augment the production capacity of the life saving gas.

He asked BJP workers to ensure everybody in their area is vaccinated.

The BJP leader also advised party workers to fight vaccine hesitancy and spread the message that the medicine (against COVID-19) is safe.

Mr Shah also said that for daily wagers, the government has extended the free 5 kg food grain per person scheme till November.

He asked BJP workers to spread awareness among people about the scheme and to ensure every eligible person gets free food grains.

BSP Has Lost Its Identity In UP: Bhim Army Chief

Rubina Dilaik Is A Sight To Behold In New Pool Video