On Camera, He Crawled To Snip Illegal Power Line, Was Caught By… 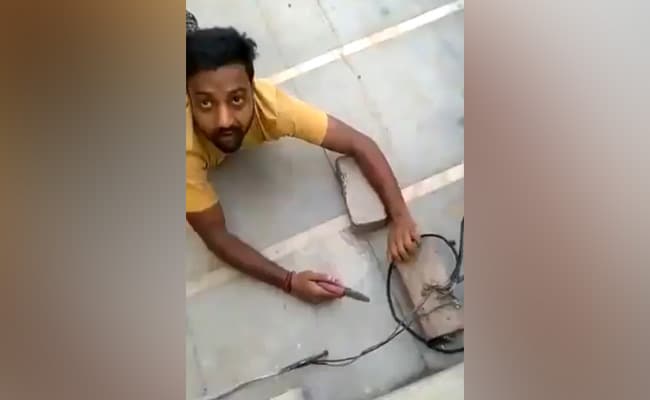 A pair of pliers in his hand, the man was about to snip the wire when he was caught.

A Ghaziabad resident’s last-ditch attempt to escape action for illegally tapping an electricity line came a cropper, thanks to a smart move by electricity department officials.

When electricity department officials reached his home to investigate if power theft was taking place there, the man tried to stealthily snip the tapped line before it was discovered, unaware that an official on the adjoining terrace was recording his movements on a video.

The video, which has now gone viral on social media and triggered several memes, shows the man crawling across his balcony to avoid being spotted by the officials. A pair of pliers in his right hand, the man slowly approaches a corner where the line is tapped and covered by a brick.

He then removes the brick and is about to snip the wire when the power official filming him says in a calm voice, “Main to yahin pe khada bhaiya (Brother, I am standing right here).”

The expression on the man’s face on realising that he has been caught red-handed, has become the subject of a sea of memes.

The video, while promoting hilarious reactions, has also trained the lens on the serious issue of power theft which continues to be rampant across the country.

The Uttar Pradesh government has of late taken several steps to tackle the problem. Last year, dedicated police stations for handling power theft cases were set up in the state as part of its efforts to minimise pilferage.

Monsoon Special: How To Make Fish Pakora – A Scrumptious Snack To Pair With Evening Tea