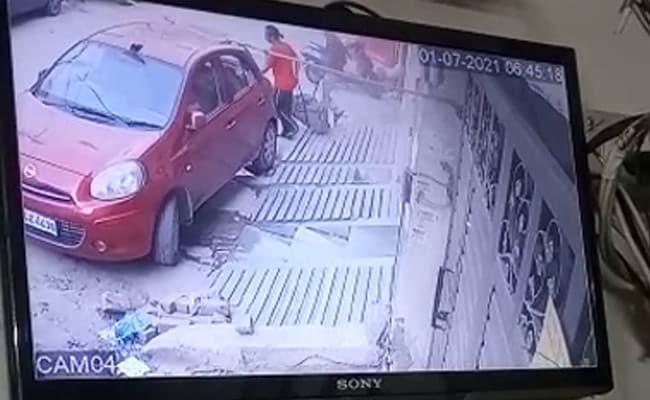 A couple who was arrested in Delhi for allegedly killing an elderly woman, their neighbour, and throwing her chopped body into a drain, spent the entire night in her home cleaning the blood after chopping her body, the police said.

CCTV visuals from their neighbourhood show two persons carrying bags, which reportedly contained the chopped body, outside a building.

Anil Arya had borrowed Rs. 1.5 lakh from Kavita, his 72-year-old neighbour in outer Delhi’s Najafgarh. The event management professional and his wife allegedly killed her on the night on June 30 as Kavita had been asking them to return her money. The elderly woman was punched and strangled.

The chilling crime took place when she was alone at home.

The couple then cut her body into three pieces, filled them in three bags and threw them in a drain in Najafgarh, senior police officer Santosh Kumar Meena told NDTV.

The couple was at their neighbour’s home between 9 pm on June 30 to 5 am the next day.

Before dumping the body in the drain, they removed jewellery from the woman’s body. They pawned the jewellery at a popular finance company and took Rs. 70,000 in return, the police said.

“The woman’s daughter-in-law came to us with a complaint on July 3 saying she is missing and that her home is locked. On July 7, she came back to us saying the woman’s neighbour too is missing. We immediately filed a case of abduction and sent a team to track the neighbour,” Mr Meena said.

The couple was tracked down to Uttar Pradesh’s Bareilly and arrested on Monday. Police retrieved the woman’s body from the drain on the same day.

China To Start Giving COVID-19 Shots To Teenagers This Month