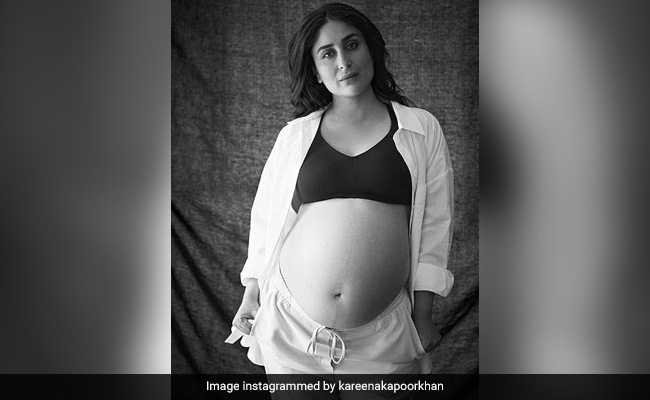 Actress Kareena Kapoor, who recently introduced her fans to her book titled Kareena Kapoor Khan’s Pregnancy Bible, on Sunday, dropped pictures from her second pregnancy shoot. While Kareena only shared two pictures, another picture from the series was used as the front cover of her book. The pictures have been clicked by celebrity photographer Rohan Shrestha. In the pictures, Kareena can be seen showing off her baby bump as she sports a white shirt and comfy pants. She can be seen wearing a black sports bra underneath. Sharing the pictures on Instagram, Kareena Kapoor kept the caption simple as she only added a few red heart emojis.

Check out the aforementioned pictures here:

Photographer Rohan Shrestha had also shared the pictures on Instagram. In the caption, he recalled clicking the pictures for Kareena “just a week before she delivered” her second baby. “Just a week before she delivered for the second, I had the absolute pleasure of getting the opportunity to shoot Bebos portraits (for the second time). First time being the summer of 2017,” Rohan Shrestha wrote in the caption of the post.

As mentioned above, Kareena Kapoor announced her book titled Kareena Kapoor Khan’s Pregnancy Bible earlier this week. “This has been quite the journey… both my pregnancies and writing my Pregnancy Bible. There were good days and bad days; some days I was raring to go to work and others where I struggled to get out of bed,” she wrote in the caption of the post.

In terms of work, Kareena was last seen in 2020 movie Angrezi Medium, co-starring late actor Irrfan Khan. Kareena will next be seen opposite Aamir Khan in Laal Singh Chaddha.