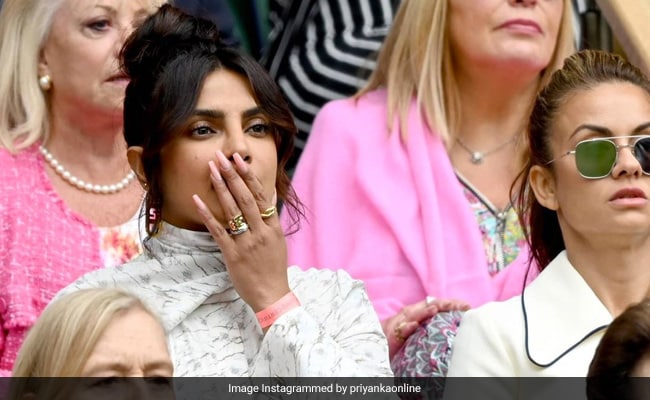 Priyanka Chopra was among a host of celebrities who watched the game in person.

Priyanka Chopra could not resist the temptation of a Wimbledon game and watched the women’s singles finals between Ashleigh Barty and Karolina Pliskova in London. Her friend Natasha Poonawala shared a selfie with the actress from the spectators’ gallery. “Girls day out,” the image was captioned.

Ms Chopra was among a host of celebrities who watched the game in person, including Prince William and Kate Middleton in the front row. Behind the British Royals sat tennis legends, Martina Navratilova and Billie Jean King. Ms Chopra sat right behind them.

An Instagram fan account of Ms Chopra shared some more photographs of her at the tournament. She wore a high neck, white floral dress. In one of the images, at one point during the game, she appears enthralled.

Separately, a short clip shared by Wimbledon on its official Instagram handle showed Ms Chopra looking at her mobile phone as the tennis legends apparently discussed the game. Prince William is also seen in the video briefly.

“Wimbledon champs never lose their passion,” the post was captioned.

In 2018, Ms Chopra attended the wedding of Prince Harry with Meghan Markle in London. Ms Chopra and Ms Markle have been friends for a few years now. In the past, Ms Chopra called the reportage around Ms Markle “racist” and said she was capable of taking on her detractors. Ms Chopra said the media’s criticism of Ms Markle was “really unfortunate” and if there’s anyone who can handle it, “it’s her”.

Ms Chopra has been staying in London for a few months now. In the city, she promoted her movie, The White Tiger, and autobiography, Unfinished.

Besides Citadel, Ms Chopra’s other future projects include the next instalment of the Matrix franchise and an American film, Text For You.

Live Updates From Saluting The Covid Heroes Townhall With Amitabh Bachchan: An Initiative To Thank Covid Warriors For Their Selfless Service During The Pandemic