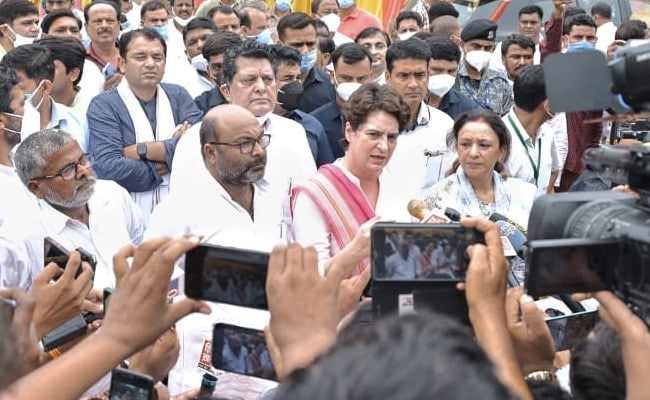 Priyanka Gandhi is holding a flurry of meetings ahead of UP polls due next year.

Every women in India has a right – protected by the constitution – to fight elections, Congress leader Priyanka Gandhi Vadra said today in a scathing attack at the Yogi Adityanath government in Uttar Pradesh over violence in local elections.  Her remarks – after a meeting with a worker of Samajwadi Party who was attacked when she went to file her nomination earlier this month- come nearly a week after the BJP had claimed “historic victory” in the polls in a setback for opposition parties.

A disturbing video that shows the Samajwadi Party being manhandled, and her saree being yanked, had sent shockwaves, prompting sharp questions by critics and opposition leaders on the state of law and order in UP.

Demanding that elections be held again in Lakhimpur Kheri district, Priyanka Gandhi Vadra today said: “It was her (the SP worker’s) constitutional right to fight the election. It has been snatched from her. “

“She went to file the nomination. She was attacked. Her saree was yanked. His son was with him. Nobody stopped people who attacked her. The police officer who tried to stop this was attacked too. The administration is silent. In such a case of violence, the election is usually cancelled. But the election was still held. Doesn’t she have the right to fight the election? Anybody can come with 10 goons and indulge in  violence. Is this our democracy? Do we want this kind of state?” she questioned while speaking to the reporters.

She even hit out Prime Minister Narendra Modi over his praise for Yogi Adityanath. “And now Prime Minister is praising the state government even though a large number of districts witnessed violence.”

“I have told her all the women in this country are standing with her. We don’t want a situation where women cant event contest polls safely.” the 49-year-old leader said.

Reports of violence emerged from many parts of UP as local polls were held. In Hathras, a Samajwadi Party leader was injured after being shot. In Chandauli district, BJP and Samajwadi workers clashed.

Priyanka Gandhi Vadra took up the issue today as she began her two-day visit to state capital Lucknow as the Congress tries to regain lost ground ahead of state elections next year.