Puri Rath Yatra Begins, No Devotees For Second Year In A Row 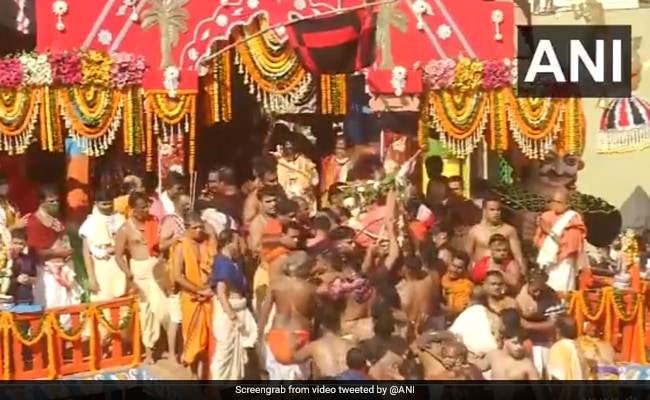 President Ram Nath Kovind and Prime Minister Narendra Modi today extended greetings to the nation as a devotee-less rath yatra, for the second straight year, begins amid curfew in view of the coronavirus pandemic.

The administration have imposed curbs across the three-kilometre long Grand Road from Shree Jagannath Temple to Sri Gunducha Temple, where all activities excluding medical emergencies are prohibited.

Pulling of the holy chariots will start at 3 this afternoon.

#WATCH | Lord Jagannath Rath Yatra to be held, without the participation of devotees today in Odisha’s Puri pic.twitter.com/VB1x0Lmqcj

As the three chariots- Lord Balabhadras Taladwaja, Lord Jagannath’s Nadighosh and Devi Subhadras Darpadalan – are ready to roll on the grand road, the police reviewed the security arrangements and appealed to the people of Puri to cooperate in implementation of the curfew orders in public interest.

“With the cooperation of the residents of Puri and blessing of Lord Jagannath, all the rituals are underway smoothly so far. We hope the mega festival will be undertaken tomorrow (Monday) peacefully in compliance with all SOPs,” Puri SP Kanwar Vishal Singh was quoted saying by news agency PTI.

People have been asked not to congregate on roof tops in large numbers to witness the festival from the residential houses, hotels, lodges and guest houses. The measure is taken keeping in view the public health and to check spread of infection among citizens.

Last year, despite the threat of COVID-19, tens of thousands gathered outside the iconic temple in Puri as the Supreme Court court allowed the seven-day chariot festival in a restricted fashion.

The Rath Yatra from the Jagannath temple is attended by lakhs of people from across the world.

Lord Jagannath is regarded as the supreme god and the sovereign monarch of the Odisha empire.

During the celebrations, he comes out of his sanctum sanctorum so devotees can see him. Temple officials claim that those who take part in the festivity “earn their passage to the heaven”.