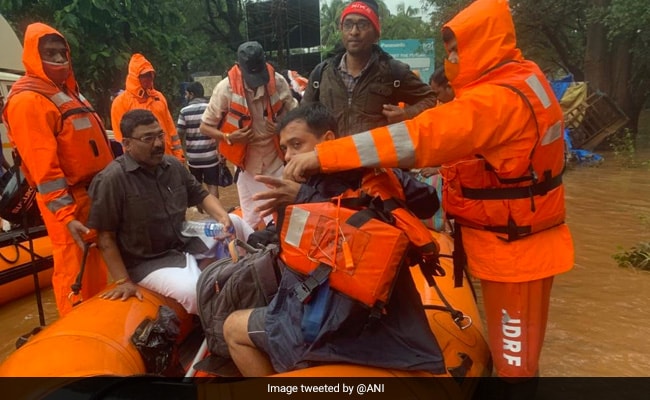 NDRF team carries out rescue and relief operations in flood-affected area in Ratnagiri.

Indian Army has mobilised teams to Maharashtra, which has been hit by heavy rainfall that triggered landslides and flooding in several districts of the state.

The Army under ”Operation Varsha” has mobilised colums in action for flood relief in the state. A total of 15 relief and rescue teams comprising troops from Aundh Military Station and Bombay Engineer Group based at Pune have been deployed overnight in affected areas of Ratnagiri, Kolhapur and Sangli districts of the state.

The Army said based on request by the civil administration it has mobilised flood relief and rescue teams to assist the local administration in flood affected areas- in the districts of Ratnagiri, Raigad, Pune, Satara and Kolhapur and Sangli.

“With the unprecedented rains and resultant heavy flow of water in various rivers, a number of areas in many states are likely to be impacted by floods,” read a release by Ministry of Defence.

The Coast Guard has extended the facility of its airbase at Ratnagiri to Indian Navy and Indian Air Force aircraft to operate from this base for rescue and relief operations in Maharashtra.

Maharashtra Chief Minister Uddhav Thackeray on Friday announced compensation of 5 lakh each for the families of those who lost their lives in the landslides caused by torrential rainfall in various parts of the state.

Here are the Live Updates: