Actor Shilpa Shetty, after sharing a cryptic Instagram story about “surviving challenges,” added another entry to her social media profile on Friday evening. This is Shilpa Shetty’s second social media post after her husband Raj Kundra was arrested in a case involving pornographic filmmaking. The actress’ post is about her new film Hungama 2 that releases on OTT platform Disney+Hotstar today. Hungama 2 marks Shilpa Shetty’s first film after 14 years. She was last seen in the 2007 film Apne. She began the extensive note with these words: “I believe and practice the teachings of Yoga, ‘The only place where life exists is the present moment, NOW’.”

Shilpa Shetty added that her film Hungama 2 “involves the relentless efforts of an entire team that’s worked very hard to make a good film” and that the movie “should not suffer…Ever.” The actress requested her fans to watch the film along with their families. She signed off the post with these words: “So today, I request you all to watch Hungama 2 with your families to put a smile on your face and for the sake of every single person attached to the film. Thank you, with gratitude, Shilpa Shetty Kundra.”

On Thursday night, Shilpa Shetty shared a quote that read, “The place we need to be is right here, right now. Not looking anxiously at what has been or what might be but fully aware of what is.” Shilpa Shetty’s Instagram story also talked about dealing with challenges: “I take a deep breath, knowing that I’m lucky to be alive. I have survived challenges in the past and will survive challenges in the future. Nothing need distract me from living my life today.” 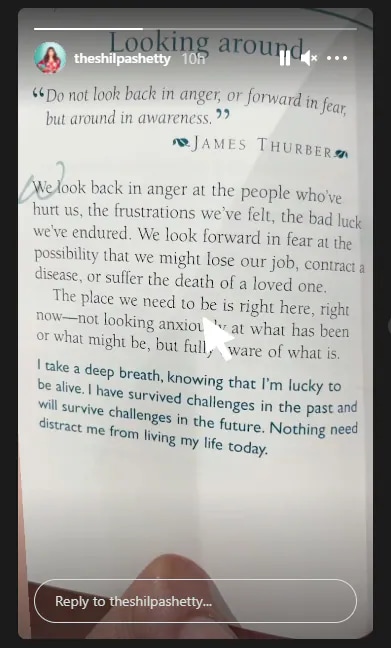 Businessman Raj Kundra was arrested by the Mumbai Police on Monday. The Police said he appears to be the “key conspirator” in the case involving pornographic filmmaking and publishing them in apps. The police also stated that it had sufficient evidence against Raj Kundra. They have also clarified that investigations have revealed no active role of Shilpa Shetty.