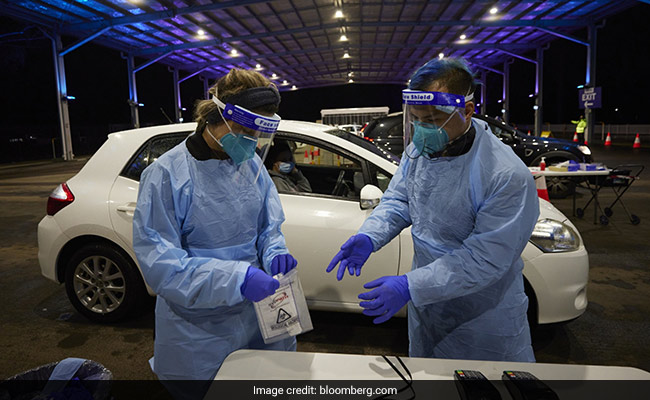 The city of 6 million people has been in lockdown since June 26.

Sydney recorded 112 new coronavirus cases on Monday — a 45% spike from the previous day — as the locked-down Australian city battles its largest outbreak since beating back the first wave of the pandemic more than a year ago.

“We just want people to stay at home,” New South Wales state Premier Gladys Berejiklian told reporters in Sydney on Monday. “The virus won’t spread if people don’t leave home. That is the bottom line.” At the weekend, Australia’s most-populous city recorded its first death since April after the delta-strain leaked into the local community in mid-June.

The city of 6 million people has been in lockdown since June 26, and faces being increasingly isolated from the rest of the nation after Berejiklian indicated that the current stay-at-home orders may need to be extended beyond Friday. On Sunday, Victoria state implemented a hard border with its neighbor, and plans for an Australia-Singapore travel bubble have been delayed until at least the end of the year.

The outbreak is highlighting the problems nation’s tardy vaccine roll-out, which has been hit by supply-chain hold-ups from contracted drug-makers amid accusations from political rivals that Prime Minister Scott Morrison failed to secure enough doses from a wide-enough range of suppliers. 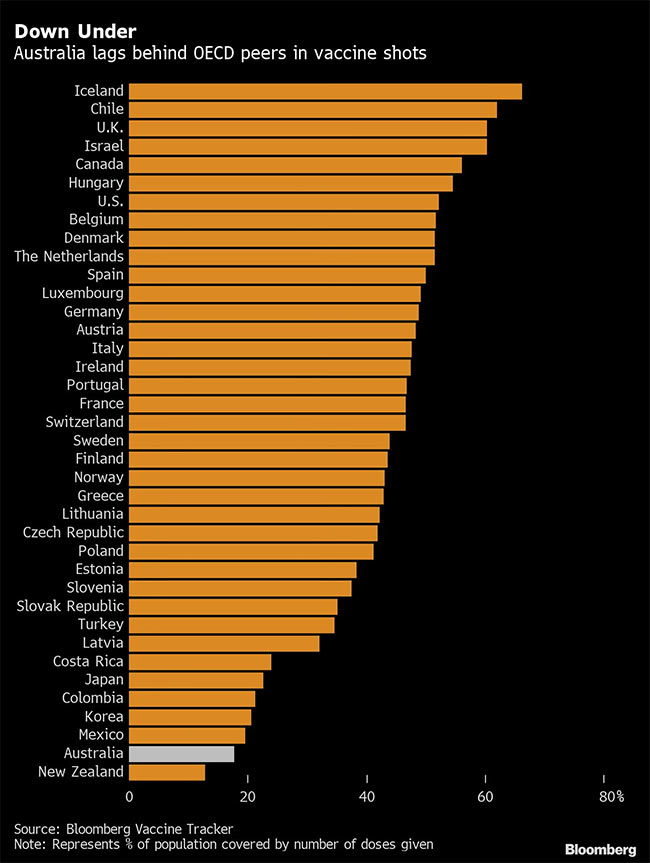 Alongside other so-called “Covid-zero” nations such as China and Singapore, the persistent outbreaks show the limits of Australia’s strategy to beat the pandemic with closed international borders and rigorous testing. The Labor opposition says the delta variant is responsible for more than 20 virus leaks out of the nation’s quarantine hotels.

The Bloomberg Vaccine Tracker shows Australia has administered enough doses for just 17.8% of its population, compared with the U.K. with 60.4% and the U.S. with 52.2%

In a bid to encourage more Australians to get the jab, Morrison’s government has launched an televised advertising campaign featuring a young female actor struggling to breath. Bill Bowtell, an adjunct professor in infectious diseases at the University of New South Wales, described the ad — which has received a barrage of criticism on social media — as “not honest or truthful or authentic.”

“We are facing a terribly serious problem in Sydney — the worst health crisis in 120 years,” Bowtell told an Australian Broadcasting Corp. interview Monday. He’s calling for tougher stay-at-home restrictions to be imposed in Sydney so the city can exit lockdown sooner, similar to what Melbourne endured last year in one of the world’s longest and most stringent lockdowns. “Businesses are being smashed. People are being laid off.”

Shane Oliver, chief economist at AMP Capital Investors Ltd. in Sydney, agreed that the repercussions of the lockdown to businesses were going to be serious, with New South Wales the nation’s economic engine room.

“It’s going to be the longest lockdown we’ve had since Victoria back in the middle of last year,” he said in an interview Friday. “The longer they go on, the more permanent economic damage they do — businesses having to close and people changing their behavior and it then takes longer to recover from that.”

The testing, tracing and quarantining system in New South Wales, which accounts for 32% of national gross domestic product, is being heavily tested by the delta variant, HSBC Global Research said in a note on Monday.

“The lockdown in Greater Sydney will weigh significantly on economic activity for as long as it is in place, at least initially mostly impacting” the third quarter, it said, adding that New South Wales Treasury estimates that each week of lockdown wipes A$850 million ($637 million) from the growth.

Berejiklian said her state was in negotiations with Morrison’s government to announce more financial support for businesses “in the next few days.”