“The Dhoti Kept Falling Off”: The “Only Issue” That Shah Rukh Khan Faced During Devdas Shoot 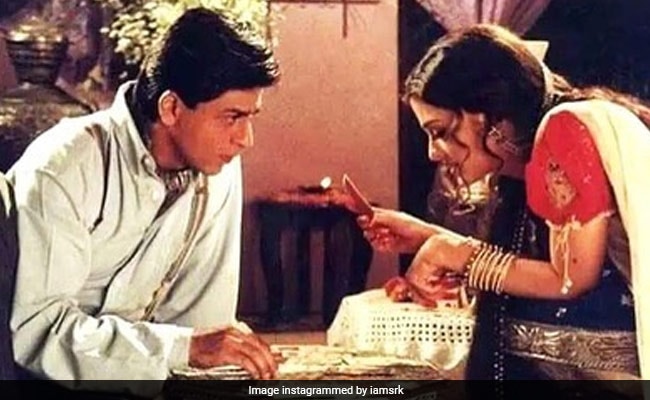 Filmmaker Sanjay Leela Bhansali’s magnum opus Devdas completed 19 years today, and actor Shah Rukh Khan, who played the lead role in the film dedicated a special Instagram post to the film’s anniversary. In the caption of his Instagram post, the actor recalled working with the cast of Devdas, which includes Aishwarya Rai Bachchan, Madhuri Dixit, Jackie Shroff and Kirron Kher. “All the late nights….the early mornings…. hard pace and problems. Worked out fine because of the gorgeous Madhuri Dixit, the stunning Aishwarya Rai Bachchan, ever cheerful Jackie Shroff dada, full of life Kirron Kher and the whole team slogging it under the masterful and patient #sanjayleelabhansali,” Shah Rukh Khan wrote in his Instagram post. He also went on to share that the “only issue” that he faced while shooting for the film was that his “dhoti kept falling off.” He wrote: “Only issue….the dhoti kept falling off….!! Thx for the love everyone. #19YearsOfDevdas.”

The 55-year-old actor shared a BTS and a still from the film to go with his caption. While the BTS features him with Madhuri Dixit and Sanjay Leela Bhansali, the still from Devdas featured Shah Rukh Khan with Aishwarya Rai Bachchan. The actor’s post received many comments from his fans. Among others, actress Jacqueline Fernandez dropped heart emojis in the comments section of Shah Rukh Khan’s post.

Shah Rukh Khan’s co-star from Devdas, Jackie Shroff also marked the film’s 19th anniversary with an Instagram post. He shared a BTS picture from the film set featuring him and Shah Rukh Khan.

Sanjay Leela Bhansali’s Devdas was released in 2002. It has been adapted from the book of the same name by Sarat Chandra Chattopadhyay. The film won five National Awards when it was released.