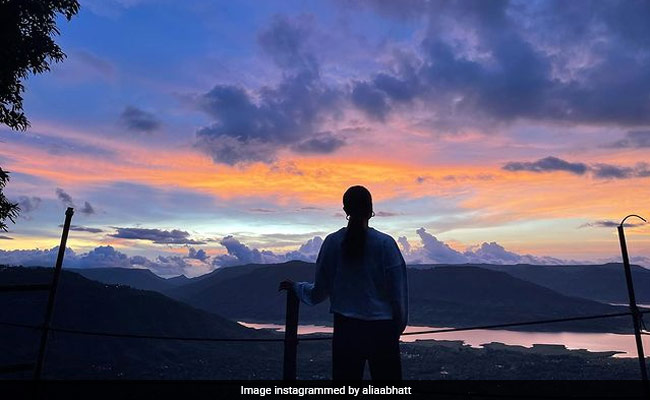 Alia Bhatt, on Wednesday, left the Internet curious by sharing a stunning photograph of herself enjoying a sunset and keeping the name of the photographer a secret in her caption. The photo shows Alia Bhatt looking at a gorgeous sunset view with her back towards the camera. “All I need is sunsets and you… taking my pictures,” she wrote in the caption and added a red heart, an infinity icon. Her fans think it is her boyfriend and actor Ranbir Kapoor who clicked the photograph as Ranbir had, in the past too, taken beautiful pictures of Alia that she had even shared on social media.

“We know it is RK (Ranbir Kapoor),” commented a fan while another wrote: “Sunsets and RK, I see.”

Alia Bhatt and Ranbir Kapoor have been dating for quite some time now. In an interview in December last year, Ranbir Kapoor said that they would have been married by that time had the pandemic not hit their lives. “It would have already been sealed if the pandemic hadn’t hit our lives. But I don’t want to jinx it by saying anything. I want to tick mark that goal soon in my life,” he had said in the interview.

Alia Bhatt is the daughter of Soni Razdan and filmmaker Mahesh Bhatt. Mahesh was earlier married to Kiran Bhatt, with whom he has daughter Pooja Bhatt and son Rahul Bhatt.

In terms of work, Alia Bhatt was last seen in her father’s project Sadak 2. She co-starred with Sanjay Dutt and Aditya Roy Kapur in the film. Alia has many films lined up. She will next be seen in Ayan Mukerji’s Brahmastra with boyfriend Ranbir Kapoor, Amitabh Bachchan and Nagarjuna Akkineni, in Sanjay Leela Bhansali’s Gangubai Kathiawadi and in SS Rajamouli’s RRR.