The Racism Of The Euro Final – Bo Jo Is Guilty

One question about English football has been comprehensively answered. Why does the English team take the knee to insist Black Lives Matter? Because racist English fans and dog-whistling English politicians pick on black football players. It’s not complicated.

Boris Johnson has shown that there are votes in being winningly racist. Jibes about ‘letter-boxed’ Muslim women and blacks’ faces split in ‘watermelon smiles’ have won him and his party anti-woke brownie points. Priti Patel, Johnson’s avowedly nationalistic Home Secretary, refused to discourage spectators from booing the English team in England when they took the knee on the ground that as citizens, these racist hecklers had a right to express their political views on ‘gesture politics’. Famously charmless, with no recourse to bloke-ish whiteness, Patel’s dog-whistling comes from a different place. In a deft piece of white-substitution, Patel has repurposed the vicious majoritarianism of her ancestral country to Tory ends.

The fans seen rioting in video clips after England lost, randomly attacking scared and bewildered bystanders, did what they did because they were drunk, inadequate, aggrieved Little Englanders who couldn’t recognize their unlovely selves in the multi-racial team that represents England. They rampaged because this is what drunken English fans traditionally do at international tournaments. They did what they did partly because political leaders like Johnson and Patel had, with their equivocation, given them reason to believe they were on their side.

Tyrone Mings, a member of the current English team who played in this tournament, made the connection between ministerial dog-whistling and the tsunami of racist abuse and violence that followed England’s loss. “You don’t get to stoke the fire at the beginning of the tournament by labelling our anti-racism message as ‘Gesture Politics’ and then pretend to be disgusted when the very thing we’re campaigning against, happens.” He was referring to Patel’s ostentatious denunciation of the racism directed at the three young black players who missed scoring from their penalties in the climactic shootout. 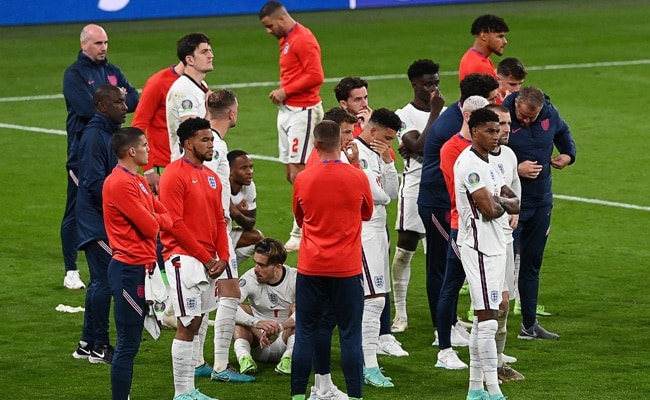 At moments like these, some student of English football will pop up as if on cue to sagely observe that things were worse in the Eighties or the Nineties. Ergo, things are better now and that should be factored into public lamentation about racist yobs. And this is true. In the early Eighties, you had to bring your dustbins and milk bottles indoors if league football came to town because the travelling hordes would use the (then) metal bins to drum on and smash the bottles.

If you were an Indian student in 1981, bent over a slipped bicycle chain and found yourself surrounded by skinhead stragglers from the second division game just played in your town, chanting ‘Paki bastard’, you might have been pleased to know that 40 years later, this was less likely to happen. But in the here and now of last Sunday, this historical decline in hooliganism was probably cold comfort to the men and women beaten up and abused by English lumpen in the aftermath of the Wembley final.

Some online critics of English excess, Indians amongst them, were keen to declare that they had rooted for Italy, because it was both the better team and the more evolved football culture. Roberto Mancini’s men were the better team and it was reasonable for a neutral to root for them. But not because Italian football is less racist or violent than English football.

Italian fans who travel to support the national team are less violent and destructive than their English counterparts. There are two main reasons for this. One, they aren’t as affluent as the English and don’t travel as much as English fans do and consequently don’t have English football’s global reputation for collective mayhem. Two, they are less invested in national team football. English middle class fans who only watch football when the national team plays because they are in it for the braying adrenalin rush rather than the game itself (which is played at a much higher level in league competition) are more numerous, boorish, violent and entitled than their Italian counterparts. That’s why they have a terrible reputation.

But at the level of domestic league football, Italian football fans are notoriously enmeshed with both criminal mafias and far-right fascist groups. Their racism and their capacity for violence in league football is of a different order from their English counterparts. Club fans in England now rarely riot, whereas Italian fans still have vicious travelling contingents because they are often funded by fan groups called ultras or tifosi. These ultras often have financial links with the mafia. Clubs are so beholden to these groups that they subcontract ticket sales to ultras who then sell them with a cut reserved for organised crime.

Ultras can be, and often are, coordinators of racist chanting. Mario Balotelli who was born in Sicily to Ghanaian parents has had his career stifled by virulent racism in Serie A. When he played for Inter against Juventus, he was tormented by monkey chants and fans shouting “There are no black Italians” in chorus. Worse still, administrators and officials routinely refuse to see that Italian club football has a racism problem. This is in very real contrast to the willingness of English football clubs in recent times (at every level) to at least formally recognize and denounce racism in football.

It’s not surprising that Boris Johnson and Priti Patel responded to the English team’s anti-racist stance in the way that they did. Neither has any real interest in club football. Before the Euros began, they saw a culture war opportunity in the players’ decision to take a knee. This was a multi-racial team with players with a habit of speaking their minds – and a manager willing to speak up for them. Marcus Rashford had twice forced ‘U’ turns upon Johnson’s government. The symbolic connection with Black Lives Matter was a chance to weaponise the values of a tiresomely progressive football team in the Tory war against ‘woke’.

Unluckily for them, Gareth Seagate’s team was unexpectedly successful. Johnson and Patel turned on a dime and became the team’s most visibly enthusiastic groupies, desperate to ride Seagate’s bandwagon. Then England lost, and the yob rabble turned on Rashford, Jadon Sancho and Bukayo Saka, the three black players who failed to score with their penalty kicks. Having helped set this mob in motion, Johnson and Patel cranked out pro forma condemnations of racist abuse. Then Tyrone Mings set words to what everyone was thinking, and called them out for the hypocrites they were.

Mukul Kesavan is a writer based in Delhi. His most recent book is ‘Homeless on Google Earth’ (Permanent Black, 2013).

Disclaimer: The opinions expressed within this article are the personal opinions of the author. The facts and opinions appearing in the article do not reflect the views of NDTV and NDTV does not assume any responsibility or liability for the same.