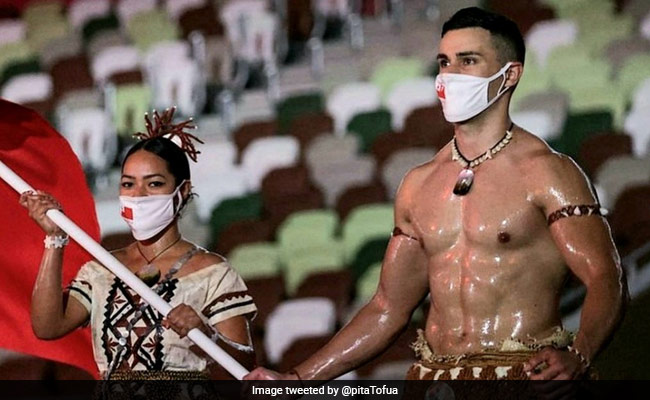 Tokyo Olympics 2020: Pita Taufatofua is a Taekwondo practitioner and skier from Tonga.

Delayed by the coronavirus pandemic, the long-anticipated Tokyo Olympics finally got underway on Friday. And Tonga’s oiled up and shirtless flag bearer made a grand entry once again during the Parade of Nations. Pita Taufatofua, who had marched in traditional Tongan attire during the Rio Summer Olympics (2016 ) and PyeongChang Winter Olympics (2018) opening ceremonies, delighted the Internet with his appearance yet again.

Mr Taufatofua, a Taekwondo practitioner and skier, had become an overnight sensation when he walked out carrying the Tongan flag in the past two Olympics.

The sight was a relief for Olympics fans waiting desperately for the Games to begin. The Olympics Twitter account shared images of the excited Tongan player. Referring to the tradition he has maintained, it said, “If it ain’t broke, don’t fix it.”

Despite wearing a mask, Mr Taufatofua could be immediately recognised and soon after he walked the parade wearing a ta’ovala, Twitter users went berserk with praise and excitement for him. A user suggested the Games were over for him and as the Tongan player has won it.

Just give him the gold medal already!

Another person said she suddenly wants to move to Tonga after seeing the Taekwondo player.

I suddenly want to move to Tonga #OpeningCeremonypic.twitter.com/nUvp35nJuv

Me when the shirtless Tonga flagbearer shows up pic.twitter.com/FifLVNyFrs

Let’s be honest, this is the only reason we all watch the #OpeningCeremony#Olympics#Tokyo2020#Tonga#Olympicpic.twitter.com/pneLp7pMON

Let’s be honest, this is the only reason we all watch the #OpeningCeremony  #Olympics  #Tokyo2020  #Tonga #Olympic pic.twitter.com/pneLp7pMON

Mr Taufatofua walked the Parade of Nations alongside Malia Paseka. Both of them will be participating in the taekwondo event during the Tokyo Olympics. It seems he had been planning to do this since last year. He had then said on his Instagram account, “Looks like we’re going to need more coconut oil – Tonga is going to Tokyo.”

The 37-year-old will be participating in the men’s 80-kg plus category in the taekwondo event. His first contest is slated for Monday against Vladislav Larin of Russia.

12 Best Places to Visit in Austria