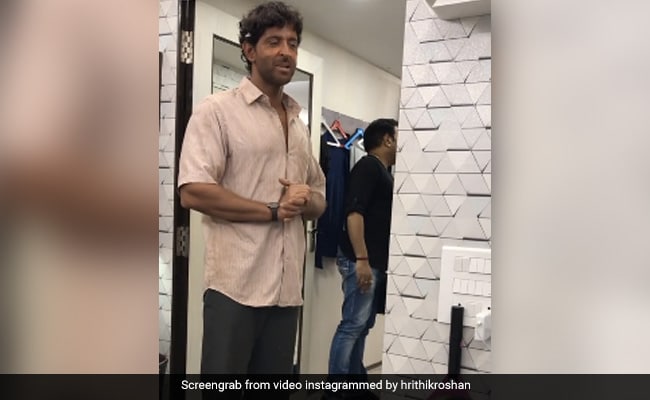 Hrithik Roshan in a still from the video.(Image courtesy: hrithikroshan)

Actor Hrithik Roshan sure got the most amazing moves when it comes to dancing, but besides that, he has also been giving us glimpses of his singing skills every now and then. The 47-year-old actor just made our dull Monday a little exciting with a throwback video that features him singing. The video is from the set of Hrithik Roshan’s 2019 film Super 30 and it features the actor in the attire of the character of a Patna based mathematician that he played in the movie. That’s not it. Remember Hrithik’s Bhojpuri accent in Super 30? The actor won hearts for acing the accent when the film was released back in 2019. In the video too, he can be seen talking and singing in the same accent. In the video, Hrithik sings the song Jadoo from his 2003 film Koi… Mil Gaya. Sharing the video on Instagram, Hrithik just wrote: “Super 30. Memories.”

The video is already breaking Instagram with scores of fans commenting on the actor’s post. “Wow,” a fan commented, while most others dropped heart and fire emojis in the comments section. Actress Dia Mirza also commented on the post and left heart emojis.

This isn’t the first time that Hrithik Roshan has broken the Internet with his amazing singing skills. Earlier this year, a video of the actor singing Ek Pal Ka Jeena went viral. The video is from a New Year’s party that was organised by Hrithik’s father, filmmaker Rakesh Roshan. In the video, Hrithik Roshan was seen sharing the stage with musician Mika Singh.

Take a look at the video here:

In terms of work, the actor will next be seen in Fighter, co-starring Deepika Padukone. He also announced a new instalment of his super-hit franchise Krrish.

Girl Attacked With Axe On Delhi’s South Campus By Neighbour