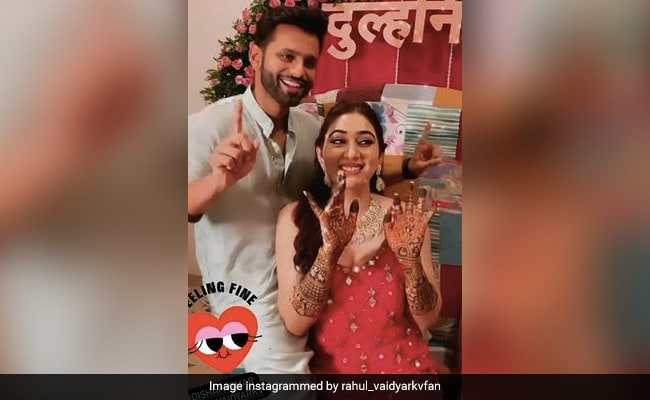 Singer Rahul Vaidya did what he does best at his mehndi ceremony. The singer and actress Disha Parmar, who are all set to get married on July 16, stepped out for a photo-op session after their mehndi ceremony, which marked the beginning of the their wedding festivities. In a viral video, he can be seen singing the iconic track Mehndi Laga Ke Rakhna from the 1995 film Dilwale Dulhania Le Jayenge. The video curated by fan pages dedicated to the singer, shared the video and other pictures from the ceremony.

Take a look at the video here:

Some more pictures from the couple’s wedding:

The singer proposed to actress Disha Parmar on her 26th birthday last year on Bigg Boss 14. Rahul was seen sporting a white t-shirt with “Marry Me?” written on it. Calling her the “most beautiful girl” he has ever met, Rahul proposed to her. The singer said that he has never been more “nervous” and added that he doesn’t know what took him so long to ask. Rahul said that he will be waiting for Disha’s answer. A few months later, on Valentine’s Day, Bigg Boss sent the actress in the house. An excited Rahul Vaidya asked her once again if she would marry him and she said yes.

Rahul Vaidya became a household name after participating in the first season of the singing reality show Indian Idol. He has sung tracks like Do Chaar Din, Keh Do Na, Tera Intezaar, Aabhas Hai and Yaad Teri among others. He will soon be seen in Khatron Ke Khiladi.

3 Million Indian Children Missed Out On 1st DTP Vaccine Dose in 2020: WHO