Vaccine Hesitancy In Some Communities A Cause Of Concern: Amit Shah 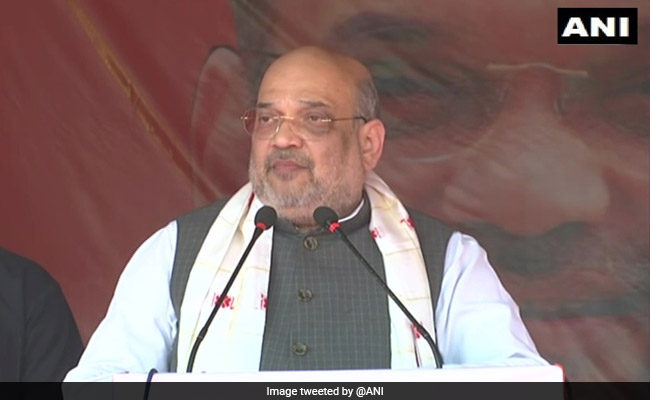 Union Home Minister Amit Shah on Monday expressed concern over vaccine hesitancy in some communities and urged people to spread awareness about the benefits of inoculation to win the battle against coronavirus.

Mr Shah, who is on a three-day visit to Gujarat since July 10, also urged youths and volunteers of social organisations to spread awareness among the masses about a free food grain distribution scheme of the Central government meant for the poor hit by the pandemic.

He made the same appeal while addressing two separate events in the Gandhinagar district earlier in the day.

“Coronavirus is a huge challenge before mankind and India fought this battle well. If you compare the deaths to population ratio of other countries, you will realise that India came out of this situation as a winner and that too with very few casualties” said Mr Shah.

He was addressing a gathering at the Swaminarayan Temple in Adalaj village in Gandhinagar after inaugurating a community centre in its premises.

“But, no one should be under the impression that our fight is over. Because the only way to win this battle is 100 per cent vaccination of the masses. However, some communities are still hesitant in taking vaccines. People are not coming forward out of fear that the vaccine will adversely affect them,” the Gandhinagar MP said.

“We need to remove this vaccine hesitancy and spread awareness about the benefits of taking vaccine doses against COVID-19. I urge volunteers of social organisations to adopt villages for this purpose and launch such awareness drives. You can give your example to allay their fear and win their confidence,” Mr Shah added.

Prior to this event, Mr Shah attended a programme at Raj Bhavan where Governor Acharya Devvrat felicitated donors who had contributed in providing ration kits to COVID warriors, such as sanitation workers.

Speaking at this event, Mr Shah referred to the Pradhan Mantri Garib Kalyan Anna Yojana (PM-GKAY) and said the benefits of this scheme must reach the eligible people, such as daily wagers.

The PM-GKAY was launched in March last year to provide free ration to the poor and needy people affected by the coronavirus outbreak. Under this scheme, 5 kg foodgrains is provided free per person belonging to poor families per month till November.

“The government will be spending Rs 1,00,000 crore on this scheme. Thus, the food grain must reach the eligible masses. Volunteers can meet such poor people and make them aware of this scheme. You can also complain to authorities if eligible people are facing any issues,” said Mr Shah.

In the morning, Mr Shah launched a lake beautification project at Nardipur village in Gandhinagar district. From the same venue, he participated in a virtual stone laying ceremony and inaugurated various development projects worth Rs 25 crore in his constituency.