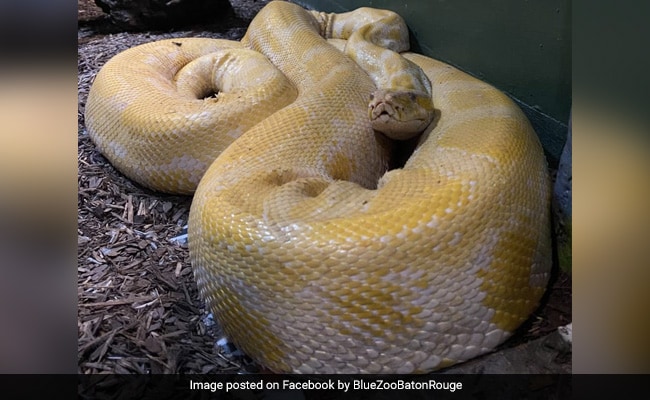 Cara, a 12-foot Burmese python, escaped her enclosure at the Blue Zoo Aquarium

A snake that escaped its enclosure at the Blue Zoo Aquarium in the Mall of Louisiana was found after a two-day search. Cara, a 12-foot python, went missing from her enclosure Monday evening, reports UPI. The snake’s flight to freedom forced the zoo to close down for two days as workers searched for Cara.

The Blue Zoo is an interactive aquarium that recently opened at the Mall of Louisiana in the US. The zoo flew in a specialist and employees spent Tuesday night searching for the python – to no avail. On Wednesday, the zoo was shut down again as employees continued the search.

Cara was finally recaptured in the early hours of Thursday. The snake was found “in the wall, ceiling area”, according to Ronda Swanson, chief marketing officer for the Blue Zoo Aquarium. It would appear as if Cara had managed to find her way into a small crawl space in the mall.

The zoo shared the good news on social media alongside a video which shows Cara being plucked from the wall. The python was found safe and healthy, the zoo said in its Facebook post.

Cara, an albino Burmese python, was described by her caretaker Victoria as a gentle and curious animal. Victoria told WBRZ that it was around 3.45 am in the morning when she received news that the python had been found.

“I don’t think I’d ever driven that fast to get back to Blue Zoo,” Victoria said. “I’d actually just left whenever they’d found her. It was a quick turnaround, and I was back at that zoo before anyone even realized it.”

“She was in our ceiling,” she added. “We knew exactly where she was for the most part.”

“The Burmese python is an easy-going snake. These guys are one of the largest snakes and they have the kindest hearts. This girl came from a family that had little kids, she was their puppy dog,” Victoria said.