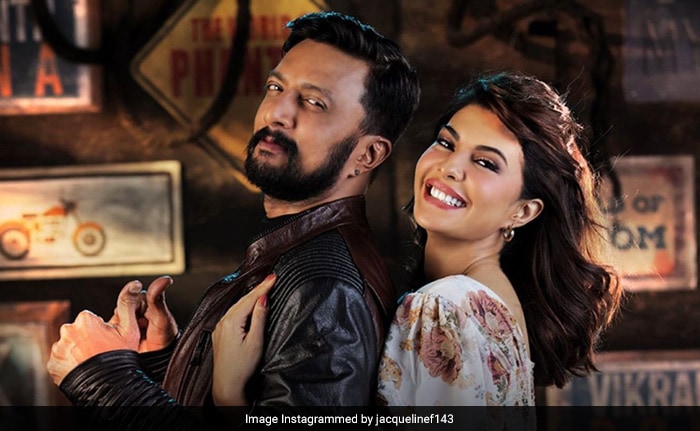 Jacqueline Fernandez’s maiden experience in the Kannada film industry has been a pleasant one and she has the team of Vikrant Rona to thank for it. In a lengthy post that she shared on Instagram on Monday, Jacqueline said that she had “an amazing time” shooting for the film, which also happens to be her first acting venture into south Indian cinema. Jacqueline tagged actor Kichcha Sudeep, who plays the leading role in the film and also thanked producer Manjunath Gowda for the team’s warm hospitality.

Sharing a photo with Kichcha Sudeep — which is presumably a still from the film — the actress wrote, “Had an amazing time shooting for my first South film venture with Kichcha Sudeep in Vikrant Rona. Thank you, Shalini Arts and Manjunath Gowda for the warm welcome and amazing hospitality.”

Speaking about her experience of working with the Kannada superstar, the actress said, “Working with Kichcha Sudeep is an experience I will cherish for a long, long time, get ready for a tough game of chess next time we meet.”

Tagging the director of the film, she wrote, “Anup Bhandari, your clarity of thought and the way the universe of Vikrant Rona is created is amazing. Thanks to the entire team, see you again soon.”

Kichcha Sudeep, too, shared a post on Instagram featuring two of his “favourite” photos with Jacqueline. He wrote in the caption, “Two of my favourites from the photoshoot with Jacqueline.”

Anup Bhandari also uploaded a post sharing his experience of working with the actress and welcomed her to the industry. He wrote, “It was a pleasure working with you. Your 1st look and character name will be releasing soon and I’m sure the audience will love it. Let’s meet once again in the dubbing studio…”

Meanwhile, Jacqueline is awaiting the release of her film Bhoot Police in which she will be seen alongside Saif Ali Khan, Yami Gautam and Arjun Kapoor. The actress was last seen in the music video Pani Pani with rapper Badshah.