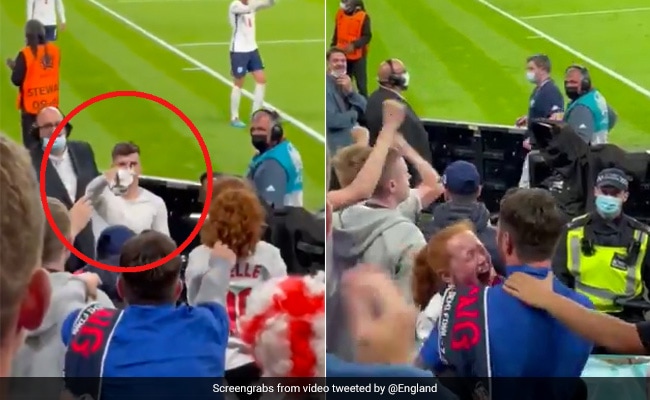 England footballer Mason Mount handed his jersey over to a young fan.

England footballer Mason Mount won a fan’s heart and left the Internet impressed with a sweet gesture a few days ago. Just as much of England was celebrating after the country’s maiden entry into the Euro 2020 final after a 2-1 win over Denmark, the footballer decided to make the day even more special for a girl who was watching her heroes from the stands.

After the win at the Wembley Stadium in London, Mount walked into the crowd and gave his jersey to the young fan. A video of the incident that has since gone viral on social media shows the young girl dazed and utterly overwhelmed by the gesture. Upon receiving the jersey, she breaks into tears of joy and falls into the arms of her father. Other fans are also seen congratulating the father-daughter duo as they hug.

The video, originally posted by a user named Rem Williams, was shared by the official Twitter page of the England football team. Along with the video, they added the note that read, “This is just… Lovely touch, Mason Mount.”

The heart-warming video has amassed over 6.7 million ‘views’ and 30 ‘likes’ in less than 24 hours.

The video was shared widely by fans on the microblogging platform. Several users praised Mount for his lovely gesture.

England footballer Peter Crouch, too, reacted to the video and said, “Her face,” followed by a teary-eyed emoticon.

Another fan said that this gesture was a testament to the kind of player Mount was. “Top effort, top player, top team,” the fan said.

That little smile back as he walks off knowing he’s made that girls day.

No wonder football is called the beautiful game, another user said.

Putting beautiful into the beautiful game – the smallest gestures make such a massive difference. This little girl will never, ever forget the night, the gesture and the feeling of that moment.

Former American basketball player Rex Chapman shared the video and said, “It costs you nothing to be kind.”

It costs you nothing to be kind. Wait for her reaction… https://t.co/NFeuOStE5V

Here are some of the other reactions:

Tell us what you think of this sweet video and do not forget to share your favourite football moments in the comments.

Watch: Rescuers Use Helicopter To Airlift Horse Trapped In Debris