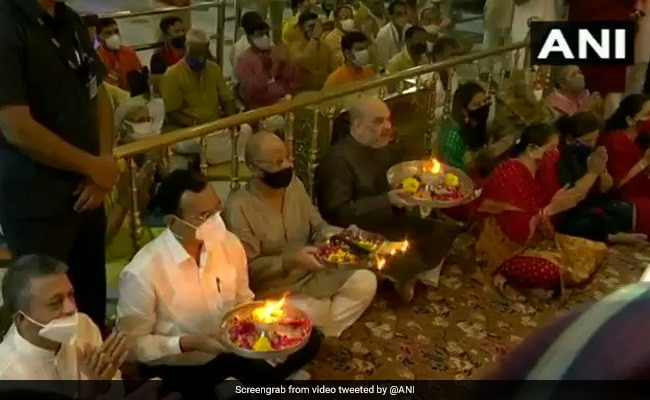 Amit Shah, the new Minister of Cooperation, who is on a three-day visit to Gujarat fed a temple elephant and also performed “aarti” at the Jagannath temple in Ahmedabad ahead of the annual rath yatra, which commences today.

The 19-km yatra will be taken out amid a curfew in view of the pandemic. Also, authorities plan to complete it in four to five hours as against the usual time of 12 hours.

The Minister is seen sitting cross-legged on the floor and performing “aarti” with other devotees. A smiling Mr Shah is also seen feeding the temple elephant sugarcane and bananas. The elephant, in turn, in seen blessing the Minister and everyone gets ready for a photo-op.

Tight security arrangements have been put in place so that yatra passes off peacefully with strict adherence of Covid protocols and guidelines.

Except for three chariots and two other vehicles, says the state government, no other vehicle, singing troupes, elephants or decorated trucks will be allowed to take part in the procession.

The government has appealed to the people to watch the yatra on television channels.

Last year, a symbolic rath yatra was organised in the premises of the Lord Jagannath temple after the Gujarat High Court denied permission to carry out a public procession due to the pandemic.

Move Over Your Regular Mushrooms, Make This Rajasthani-Style Mushroom Dhora In 20 Minutes