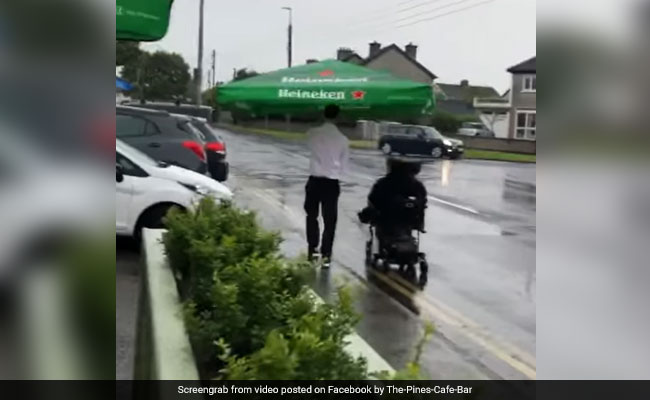 A cafe worker in Ireland was spotted helping a patron reach home in pouring rain.

A video is going viral on the internet of a bartender removing a patio umbrella to escort a patron on a wheel-chair home during torrential rain in Ireland. It shows the patron rolling down his wheel-chair on a wet road, as the young bartender holds the gigantic umbrella to shield both of them from the rain and wind. Sharing the video on Twitter, former professional American basketball player Rex Chapman asked his followers to be like Frankie, the barman, suggesting it does not do any harm to be a “Frankie” every once in a while.

The bartender of The Pines Cafe Bar – Frankie – removed a patio umbrella to escort a patron home in the pouring rain.

Be kind. Be a Frankie…pic.twitter.com/m4M56PFu97

Frankie works at The Pines Cafe Bar in Dublin and went beyond his call of duty to help the customer reach home. Since his gesture of goodwill was filmed and shared online, the video has been viewed more than 5.34 lakh times and earned a lot of praise for Frankie.

One user said his gesture was “typical Irish”

Another called Frankie a kind soul.

Frankie is a kind soul.

A third user referred to Frankie walking a little crooked as the wind hit the umbrella, but added some fun to how he said it.

I know it is the wind hitting the umbrella making the bartender walking that crooked line but I would like to think it was because he was drinking too.

Another said he has been escorted to many pubs but never as nicely as this.

I’ve been escorted out of many bars, but never as nicely as this.

Here are a few more reactions to Frankie’s kind gesture:

If you drink at the same pub every day for 55 years, you unlock the Diamond level of barfly status!

This doesn’t surprise me at all and brings a smile. I lived there for a few years; so many wonderful people. My husband (Irish) and my daughter are there right now. His 90 year old father passed away today…grateful they could travel and be with family.

This is why I love the Irish/Scottish! He had proper home training! Something tells me Frankie didn’t really care how far the old man lived, just as long as he got there dry as a bone and safe

Well done, Frankie. Any locals, please give him my regards. — a humbled American

The video was first posted on Facebook by The Pines Cafe Bar.
Mr Chapman usually shares such videos and posts on his Twitter handle to bring attention to people showing kind gestures to others. He also shares some funny videos. Recently, he shared a video of a little boy dancing in sync with a group of dancers performing in a park.

“This little man dancing with the big folks is the Twitter content I’m here for…” said Mr Chapman.

Watch: Rescuers Use Helicopter To Airlift Horse Trapped In Debris