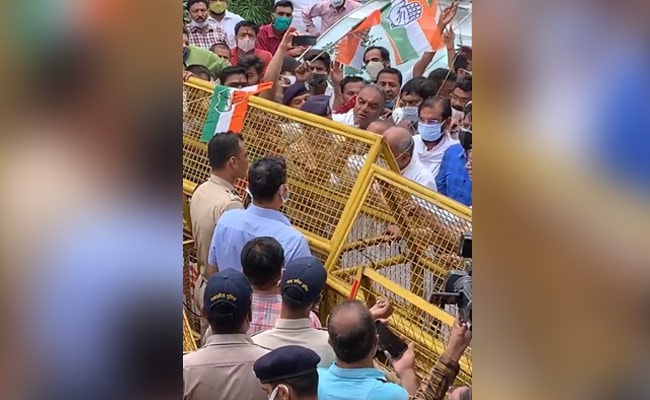 The Madhya Pradesh police on Sunday used water cannons on former chief minister Digvijaya Singh and other Congress workers who were protesting against the state government in Bhopal over a proposed office to be built on state land.

The Congress workers led by Mr Singh were protesting against the government’s decision to allot 10,000 square-feet of land in Bhopal to an RSS-linked institution. The police tried to stop their march towards the project site with barricades. As they tried to jump the barricades, the security personnel used water cannons to disperse them.

Talking to the media later, Mr Singh said the government had given the land to the institution under pressure. He claimed the land had been reserved for a park. He said former chief minister Babulal Gaur and Shivraj Singh Chouhan had planted saplings in the same park.

He warned that the Congress will demolish the foundation stone for the office soon.

Later, a heated argument broke out between Mr Singh and Bhopal DIG Irshad Wali after the politician’s foundation stone warning. The officer said the police will keep an eye on him.

The police have filed a case against Mr Singh and eight other Congress leaders along with 200 party workers for allegedly organising the protest without prior permission and violating anti-Covid rules.