Waterlogging, Traffic Snarls In Some Parts Of Delhi After Rain 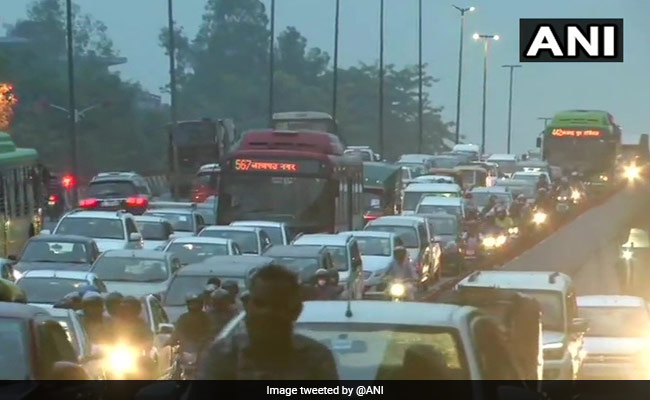 Delhi Rain: Traffic snarls were witnessed in parts of Delhi due to waterlogging caused by rain.

Many parts of the national capital, including a portion of the newly-redeveloped Chandni Chowk, witnessed waterlogging and heavy traffic snarls following rainfall on Wednesday.

According to the Public Works Department (PWD), traffic police and municipal authorities, at least 149 complaints of water accumulation on streets and low-lying areas were reported on Wednesday.

Municipal officials said that five incidents of tree felling were reported on Wednesday.

A purported video was circulated on social media on Wednesday afternoon where ankle-deep water is visibly flowing on the main Chandni Chowk street near Jain Mandir and people are seen wading through the inundated stretch.

PWD officials said that the intensity of the rain was “very high” due to which water accumulated briefly on the newly-redeveloped Chandni Chowk stretch near Jain Mandir.

“The water was cleared within 10 minutes. Normally, we call it waterlogging if water stays for more than 30 minutes after rains stop. This should not be called waterlogging. The entire stretch (of Chandni Chowk) has been paved now and surface runoff takes some time to drain off,” a PWD official said.

The Minto Bridge, however, remained clear of the waterlogging on the second consecutive day on Wednesday.

A senior PWD official said that waterlogging at the Ring Road near WHO building was caused by an overflowing sewer line of the Delhi Jal Board (DJB).

“The water was cleared within 15-20 minutes at the Ring Road, Vikas Marg and Pragati Maidan,” the official said.

The showers inundated major roads and low-lying residential areas and caused traffic snarls in parts of the city.

The waterlogging in Shahdara was such that the traffic police had to restrict vehicular movement on Swami Dayanand Marg.

“Traffic movement is closed on Road no.57 Swami Dayanand Marg towards Shahdara due to waterlogging,” Delhi Traffic Police said in a tweet.

The traffic police also advised commuters to avoid Azadpur-Mukarba Chowk, Pul Prahladpur and Bhajanpura stretches due to heavy traffic because of waterlogging.

“I was stuck in a jam at the Ring Road near the IP flyover for about 20 minutes. It was caused by waterlogging there. Delhi roads submerge in water even after a slightest of rain,” a commuter Shivanshu Mishra said.

The monsoon finally embraced Delhi on Tuesday, 16 days behind the usual date of the onset.

Light to moderate rainfall is expected in Delhi over the next six days, India Meteorological Department (IMD) officials said.

Assam Chief Minister To Step Up War On Drugs: “Home Minister Asked Me…”