What’s Keeping Rahul Vaidya And Disha Parmar Busy Ahead Of Their Wedding? 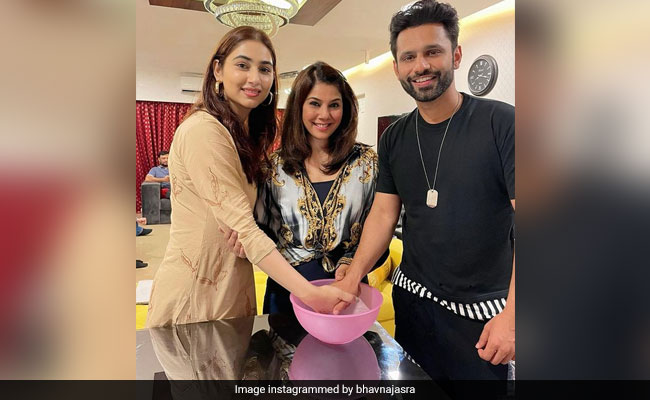 Singer Rahul Vaidya and actress Disha Parmar, who are all set to get married on July 16, recently decided to get a memento of their personalised hand impression. Life-casting artist Bhavna Jasra, who has made mementos for Deepika Padukone, Ranveer Singh, Kapil Sharma’s daughter Anayra and many other renowned personalities, shared a picture along with the couple on her Instagram profile. “There really can’t be a better gift than them holding each other’s hands to seal a promise of togetherness for life. We wish the couple happiness forever,” read an excerpt from her post.

In another post, Rahul Vaidya can be heard singing Tere Haath Mein for Disha Parmar.

The couple announced their wedding date a few days ago with a statement that read: “With the blessings of our families, we are delighted to share this special moment with you all. We are elated to announce that our wedding is set to take place on 16th July, 2021. We seek your love and blessings as we begin this new chapter of love and togetherness.”

The singer proposed to actress Disha Parmar on her 26th birthday last year on Bigg Boss 14. Rahul was seen sporting a white t-shirt with “Marry Me?” written on it. Calling her the “most beautiful girl” he has ever met, Rahul proposed to her. The singer said that he has never been more “nervous” and added that he doesn’t know what took him so long to ask. Rahul said that he will be waiting for Disha’s answer. A few months later, on Valentine’s Day, Bigg Boss sent the actress in the house. An excited Rahul Vaidya asked her once again if she would marry him and she said yes.

Rahul Vaidya became a household name after participating in the first season of the singing reality show Indian Idol. He has sung tracks like Do Chaar Din, Keh Do Na, Tera Intezaar, Aabhas Hai and Yaad Teri among others. He will soon be seen in Khatron Ke Khiladi.

Maggi Manchurian Recipe: A Twist To The Classic Manchurian Gravy (Recipe Inside)