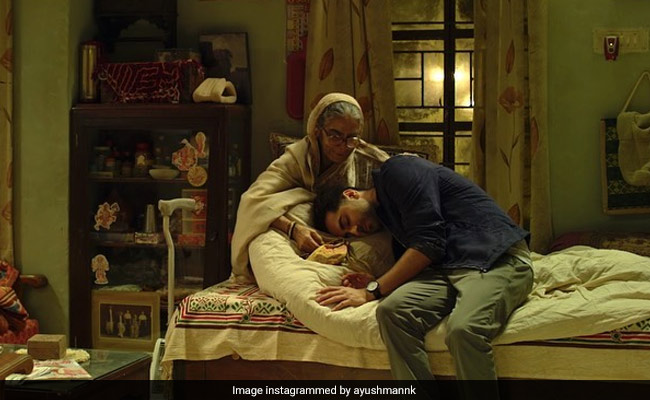 A throwback of Surekha Sikri and Ayushmann. (courtesy ayushmannk)

Veteran actor Surekha Sikri, who died at the age of 75 on Friday morning, was remembered by members of the film fraternity. The cast of the 2018 film Badhaai Ho shared emotional tributes for the actress on social media. Ayushmann Khurrana, who starred as Surekha Sikri’s grandson in the film, wrote an extensive note, sharing some memories from the film Badhaai Ho. “In every film we have a family and we end up spending more time with the film family than our own families. One such beautiful family was in Badhaai Ho. Out of all my films, it was the perfect family with a perfect cast. Surekha Sikri was the head of our family, who was more progressive than the entire family tree. You know what, that was her in real life too. A complete boho. A chiller. Young at heart,” read an excerpt from his post.

Ayushmann recalled an incident from the film’s screening and he wrote in his note: “I remember when she was boarding an auto rickshaw after the screening of our film, Tahira (his wife Tahira Kashyap) and I gave her a lift back home and we said “ma’am you are the real star of our film” and she replied “wish I get more work.” Tahira and I were speechless. We watched her frail demeanour walking towards her building. That’s my last memory of her.” He added, “I would request you to watch her recite Faiz Ahmed Faiz’s nazm ‘Mujh-se pehli si mohabbat mere mehboob na maang.’ Aapko unse aur mohabbat ho jaayegi. An impeccable performer. A consummate artiste. A legend. You’ll be missed Surekha ma’am. Thank you for the beautiful memories.”

An emotional Neena Gupta, who played the role of Surekha Sikri’s daughter-in-law in the film Badhaai Ho, posted a video remembering the legendary actress.

Gajraj Rao, in his eulogy for the actress, who played his onscreen mother in the film, wrote: “Making a film is like travelling in a train, where the journey is a destination in itself. You meet all kinds of co-passengers here. Some open up their tiffins and hearts to you, while some guard their luggage and eye you with suspicion. Badhaai Ho will always be that special train journey which brought me to a new station in life, and I’m truly thankful that we had someone like Surekha ji as the emotional anchor of this ship. She was definitely the youngest at heart on the sets, and had no airs about her stature or endless experience as an actress. Her craft was defined by her years of homework and ‘riyaaz‘ as an actress, combined with a child-like enthusiasm. As all journeys must end eventually, we bid goodbye to Surekha ji today. Thank you, Surekha ji, for all the wisdom and memories you have left us with.”

For her performance in Badhaai Ho, Surekha Sikri received a National Film Award for the Best Supporting Actress and she collected her award in a wheel chair and was honoured with a standing ovation at the award ceremony held in New Delhi in 2019. Ayushmann Khurrana was also present at the ceremony. He received the National Award for the Best Actor for his performance in AndhaDhun. Badhaai Ho also received the award for Best Popular Film Providing Wholesome Entertainment.

Surekha Sikri, a recipient of three National Film Awards, also starred in several TV shows and was a part of many theatre productions. Some of her most popular works include Tamas, Mammo, Salim Langde Pe Mat Ro, Zubeidaa, Badhaai Ho and the daily soap Balika Vadhu. She was last seen in Netflix’s Ghost Stories, in a segment directed by Zoya Akhtar.

“Run To RSS, We Don’t Need You”: Rahul Gandhi’s Message To Dissidents